TAMPA, Fla. - A Lennard High School senior's walk across the stage at graduation has been months in the making. Hailey Highsmith suffered a stroke a little over a year ago, losing her ability to walk and talk, but that didn't stop her.

Applause erupted inside the entertainment hall at the Florida State Fairgrounds Monday night when Highsmith took her first steps across the stage to receive her diploma.

"It was heartbreaking and beautiful and amazing. I can't even, like, put it into words," Hailey's mom Robin Highsmith said.

A little over a year ago in the middle of the night Hailey had a brain aneurysm that ruptured causing her to suffer a stroke. It left her without the ability to walk or talk.

MORE: ‘We did it’: Thousands who pursued higher education amid a pandemic graduate from USF

"We had actually grieved her graduation that it just wasn't going to happen because her recovery was very, it was very slow, but there was always progress it was just very slow," Robin Highsmith said.

In October, the family decided graduation would have to wait a year, but as the months passed Hailey made considerable progress. 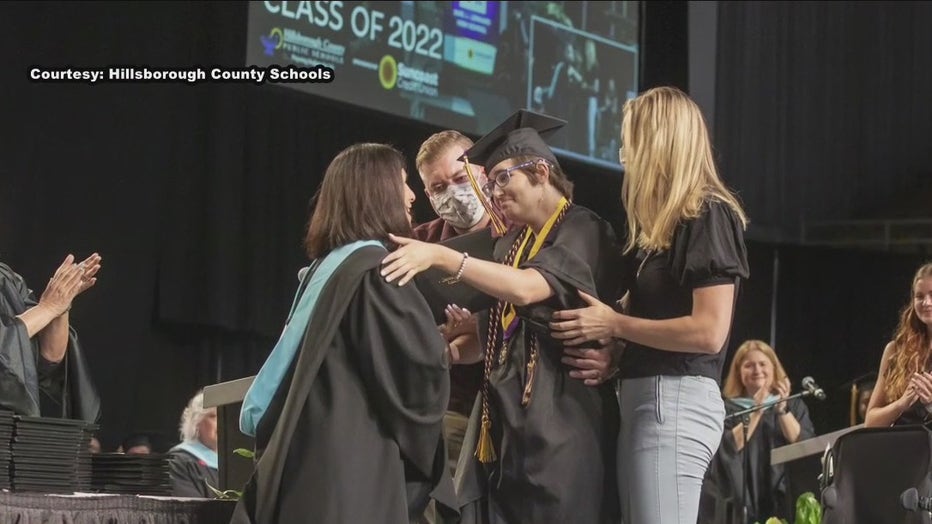 "Her voice turned back on, and she was able to start communicating again, we were we understood that she was able to read and write and that her cognitive abilities, her comprehension, and her speaking abilities were going to be fine," Robin Highsmith said.

Since February, Hailey has been working with her team at Johns Hopkins All Children's Hospital to be able to walk at graduation.

"She's more motivated each day. Like I think she has realized how much mobility she has and what she can do, and she's wanting to do it by herself," Hailey's physical therapist Dr. Marissa Lisenbee said. "And there's days where she's like, All right, I mean, do it, let's do it. And it's awesome to watch."

It was an important moment for Hailey, and her family said she was determined to make happen.

"There's nothing that she won't be able to take on. And I think everything kind of looks small when you compare it to something like what she's gone through, you know, in the last year or so. I'm very excited to see how bright and beautiful her future is," Robin Highsmith said.

Over the next year, Hailey will be working to finish her associate's degree and by next fall plans to join her friends at the University of Central Florida.