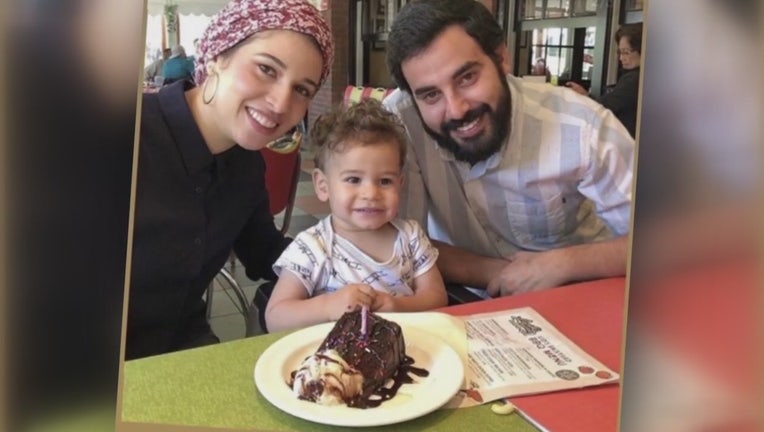 LONG BEACH, Calif. - A family of three has died after they were struck by a suspected DUI driver while trick-or-treating on Halloween night in Long Beach.

The Awaida family, 3-year-old Omar Awaida, his 30-year-old father Joseph Awaida and 32-year-old mother Raihan Dakhil are part of the local Muslim community and own Joe's Auto Center in Long Beach. The GoFundMe post says the fund is for "medical, funeral and other financial burdens the family will have to endure as a result of this tragedy.'' An update posted later said, "In response to the overwhelming generosity this campaign is receiving, the family intends to use any excess funds (beyond the above stated scope) towards a lasting legacy project (Sadaqa Jariya), to be determined in the near future. Thank you again for your support.''

The crash occurred at 9:55 p.m. on Halloween night in the area of Country Club Drive and Los Cerritos Park Place, where responding officers found a man, woman and boy lying on the ground.

Joseph Awaida died shortly after the crash and his son died Saturday, police said. Dakhil died at the hospital on Sunday.

Friends are collecting money to help cover funeral and medical costs for the family.

More than $166,000 from more than 2,800 different donors was collected within a day of the GoFundMe page being set up for the victims.

A community continues to mourn after a young family of three were fatally struck by a suspected DUI driver on Halloween while trick-or-treating.

Long Beach Police determined that 20-year-old Carlo Adrian Navarro was driving southbound on Country Club Drive when he failed to make a turn and instead drove onto the sidewalk and hit the family as they walked from Los Cerritos Park Place.

Navarro was detained at the scene and later arrested for allegedly driving under the influence and gross vehicular manslaughter. He was jailed on $100,000 bail but has since posted bond and was released Friday, according to the Sheriff's Inmate Information Center.