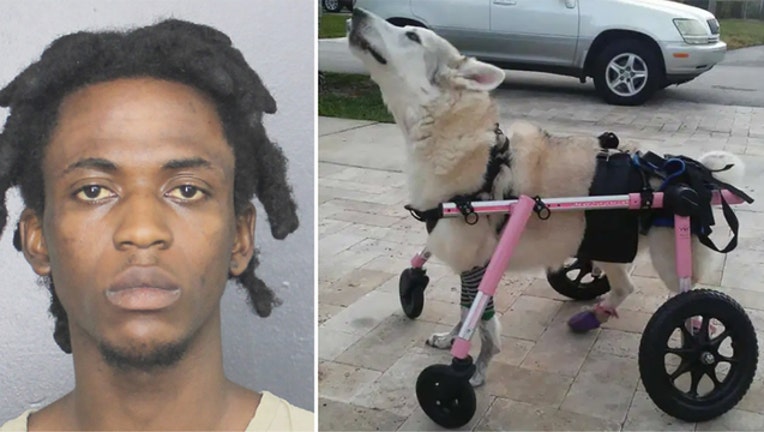 OAKLAND PARK, Fla. - Police in South Florida have arrested a suspect days after a disabled dog was found dead inside a stolen car.

Zorra, a 13-year-old disabled husky mix, was resting in the back seat. The car was found days later near a pond in Sunrise. Zorra's body was found inside the vehicle. While the cause of death is still undetermined, investigators believe she died of a heat stroke.

"Zorra is gone, she is dead," Amy Roman, the founder of the group 100+ Abandoned Dogs of Everglades Florida, said in a Facebook video. "I hope that they find this piece of s--- and he pays for what he did."

The dog's owner, Wanda Ferrari, had left Zorra in an air-conditioned 2005 blue Volvo station wagon on Thursday while she ran into a Dollar Tree in Oakland Park. The dog, who typically used a pink wheelchair to get around, was lying on a pillow in the backseat, not in her wheelchair.

When Ferrari returned to her car, it was gone — and so was Zorra.

Ferrari said the dog was her constant companion as she deals with a breast cancer recurrence.

Rescue groups immediately pleaded for Zorra's return. A pet detective was hired, and a $3,000 reward offered.

Police connected Francois to the crime after he was arrested for burglarizing a home Wednesday night. He was a passenger in a stolen car, with several items found inside the vehicle that were later identified as stolen. One of those items was the key to the 2005 Volvo station wagon.

The Broward Sheriff's Office said Francois was on pre-trial release and was wearing an ankle monitor. Detectives were able to confirm his location on the day of the incident through the GPS monitoring system.

Francois is being held without bond.

NOTE: Previously reports indicated that the stolen car was located in a pond in Lauderdale Lakes. The latest update from Broward Sheriff's Office said the vehicle was actually found at an apartment complex in Sunrise. Our article has been corrected.