BRADENTON, Fla. - The conditions in which some are living in Manatee County are hard for anyone to forget, and sheriff's deputy Joy Jewett never does.

She also never forgets a name. As she makes her rounds in the makeshift homes, tents, and outbuildings, she calls out a name.

"Is this Chris?" she asked outside of a tent.

The person inside responds, "Yes."

When those who feel lost want to give up, Jewett doesn't let them.

"Have you talked to your daughter? How's that going," she asked.

She fights back weeds, trash and the elements so that she can ask folks like Chris if they've spoken to their family, if they've followed up with a doctor, or if they've had something to eat.

Each day she goes into homeless camps for one main reason.

"It's about you guys getting out of here," she said to a group of women.

Six years ago, Deputy Jewett started at the Manatee County Sheriff's Office as a patrol deputy. The homeless population quickly caught her attention.

"I'd see them on the street and stop and talk to them and ask, 'Why are you out here? What needs to change in your life?'" she recalled. 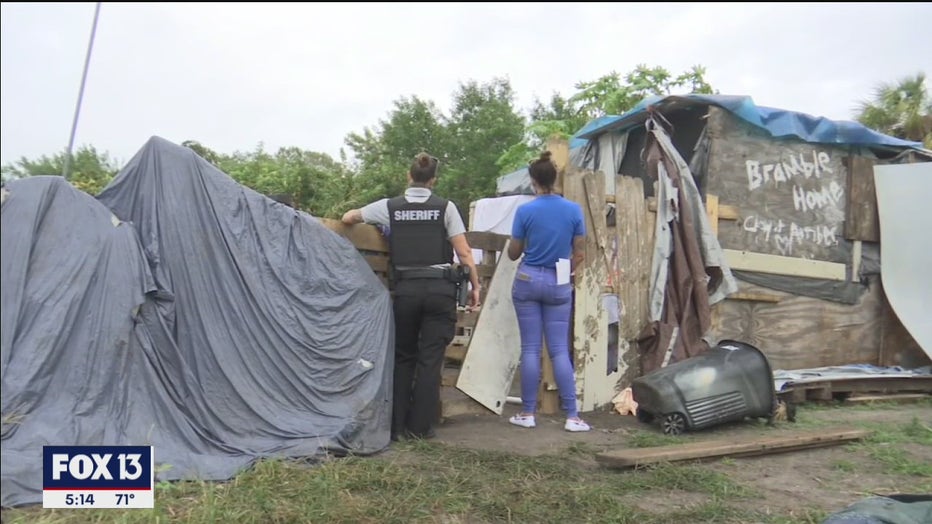 "Even if we just help one. If one just gets in and does the work and gets some help, then that’s what it’s all about," said Holloway.

It's a reality Holloway can relate to. She's been sober for 10 years.

"I know what it feels like to feel hopeless and desperate and have no way out. A lot of times, people just want somebody to listen to them," she said.

That listening ear often belongs to Deputy Jewett. She has a list of those who need help. Every day it grows, but every now and then, she can mark one name off -- someone who took the help.

"If you ever want to make that change, you know I already talked to them, you know you can get back in, so that’s on to you," she told a woman.

While she is impacting change, Deputy Jewett said more needs to be offered in order for her kind of work to have a lasting impact.