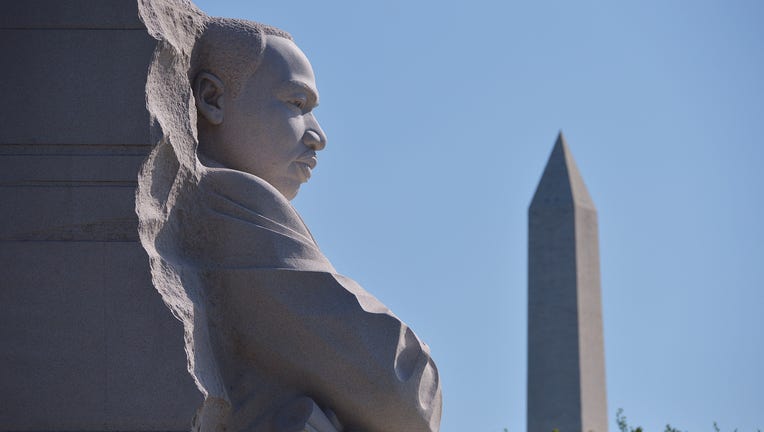 The memorial, which stands near the Lincoln and Jefferson Memorials, was the first to honor an African American individual on the National Mall. The U.S. National Park Service dedicated the 30-foot, white granite statue at West Potomac Park in August 2011.

The vision for the monument came in 1996, after Congress authorized Dr. Martin Luther King, Jr.‘s fraternity, Alpha Phi Alpha, to establish a memorial in Washington.

After a rigorous design competition with hundreds of entrants, a design was selected in 2000 - a sculpture of King with his arms crossed appearing to emerge from a stone extracted from a mountain.

The design was inspired by a line from the famous "I Have a Dream" speech in 1963: "Out of the mountain of despair, a stone of hope." King's "Dream" speech during the March on Washington galvanized the civil rights movement.

So far, the U.S. National Park Service hasn’t unveiled any official plans to commemorate the anniversary of the memorial, which attracts millions of sightseers each year. Park rangers also haven’t said if the COVID-19 pandemic will affect those plans.

However, The Memorial Foundation Inc., the organization responsible for building the monument, announced on its website that it plans to hold events between Oct. 15 and Oct. 17 to mark the occasion. Though the memorial was officially dedicated in August 2011, Hurricane Irene forced the dedication ceremony to be pushed back to October 2011.

The 10th anniversary of the memorial will come at a time when the nation still looks to heal the racial divide decades after King’s death. Last year, the country saw widespread civil unrest over the killing of George Floyd, a Black man, by a white police officer and its links to systemic racism and police brutality. The post-Floyd demonstrations prompted governments and corporations alike to reevaluate, leading to the removal of Confederate symbols across the South and the retirement of racially insensitive brands, although several of those efforts were well underway before Floyd’s death.

The family of George Floyd spoke at his funeral on June 9 in Houston.

King was born in 1929 in Atlanta. He attended segregated public schools, graduating from high school at 15 years old. In 1948, he received a B. A. degree from Morehouse College. In 1954, King became pastor of the Dexter Avenue Baptist Church in Montgomery, Alabama. He led several civil rights campaigns, including a bus boycott which led to the desegregation of Black and white passengers when seated onboard. In 1963, he led the March on Washington where he delivered his famous speech. In 1964, he won the Nobel Peace Prize.

On the evening of April 4, 1968, he was assassinated while standing on the balcony of his motel room in Memphis, Tennessee.

Another major memorial honoring King Jr. and his wife, Coretta Scott, is moving forward in Boston, where they met and studied in the 1950s.

King Boston, the privately funded organization coordinating the estimated $9.5 million project, said this week that fabrication of a roughly 22-foot-high bronze sculpture depicting four arms embracing is expected to begin in March after years of planning.

When unveiled late next year, "The Embrace" will be one of the country’s largest new memorials dedicated to racial equity, the organization says. It will be installed on Boston Common near the site of a 1965 rally and march led by King.

Besides the King memorial, the organization is also raising money to build an economic justice center in Roxbury, a historically Black neighborhood in Boston where King preached. It also plans to launch an annual gathering exploring issues of race and equity.

"It's not only how symbols and monuments represent this commitment to equity and inclusion," Imari Paris Jeffries, King Boston's executive director, said. "It's also about how research, data and policy work to find new solutions, and how we use the arts and humanities to ground us."