PALM HARBOR, Fla. - An animal cruelty case in Palm Harbor is now getting national attention after famed rocker Ted Nugent pledged a $5,000 reward for information that could help lead to the arrest of the person or people responsible for shooting deer with arrows.

So far, FWC says at least four deer have been shot in the Lansbrook community. At least one deer – a fawn – was found dead with an arrow in its abdomen.

Disturbing images capture the aftermath of innocent deer in distress.

"This is definitely not a hunter. A hunter would not be leaving injured deer to die or suffer," Lansbrook resident Lexie Vanderweit said.

One photo shows a doe with an arrow completely piercing her neck and sticking out the other side. In another photo, you can see a deer with an arrow through its back left leg.

Another image shows a fawn just one day before it was found dead after being shot with an arrow in its abdomen.

"I was fighting back tears. Lexie was crying. It's extremely disturbing to watch the FWC officer pull the arrow out of the abdomen of the fawn," Lansbrook resident Nancy Bloch said. 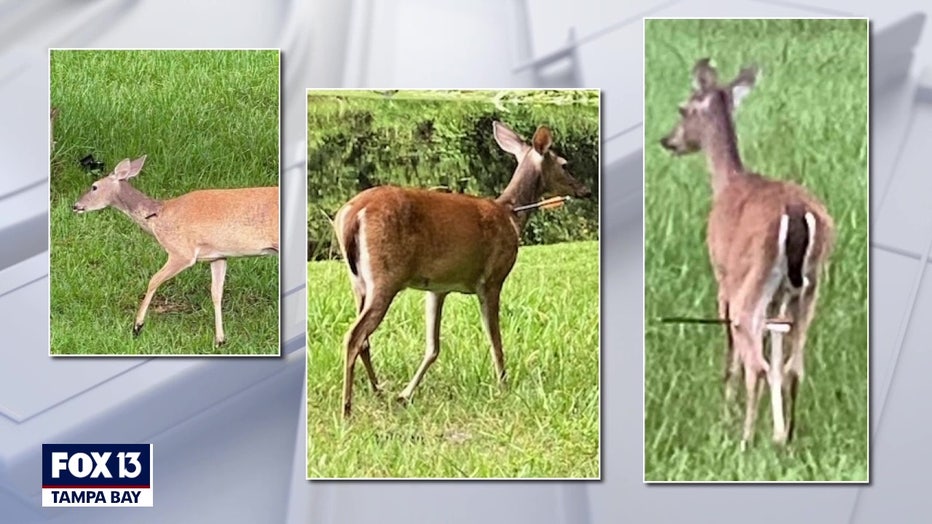 Bloch and Vanderweit have been organizing an effort to find the person responsible by putting up flyers and even going to door-to-door. Their efforts are now getting the attention of famed rocker Ted Nugent.

"Like everybody with a conscience and a soul and any intellect at all, we are aghast and we are angry and we want to hold the guilty vandals accountable," Nugent said.

Vanderweit says the support has overwhelming and hope it will ultimately lead to an arrest.

"Local residents care so much and so do people who are famous. Famous people care about wildlife and animals and they are offering rewards. Everybody wants this person caught," Vanderweit said.

If you have any information that could help find the person or people responsible, you're asked to call the FWC tip line at 888-404-3922.