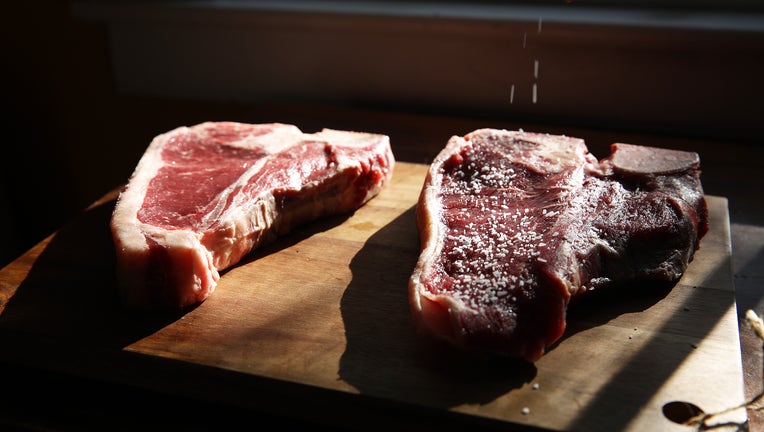 T-bone and porterhouse steaks sit side by side on a cutting board while columnist Christine Burns Rudalevige seasons the porterhouse with salt. (Staff photo by Ben McCanna/Portland Press Herald via Getty Images)

OMAHA - Nebraska Gov. Pete Ricketts ramped up his crusade for the meat industry on Wednesday by endorsing a new "beef passport" program to promote meat eating, a few weeks after he blasted Colorado's governor for a resolution encouraging its residents to eat less.

Ricketts, a Republican, cast meat as essential to his state's economy and the nation's food security. He criticized "radical environmentalists" and Bill Gates for prooting alternatives, such as synthetic, lab-grown meat, and for arguing that the current global meat production system isn't sustainable.

"If you do away with the beef industry, it's going to be devastating to Nebraska," Ricketts said at a downtown Lincoln steak house, where he issued his annual proclamation of May as "Beef Month." "It would have a huge impact on our small towns and rural communities."

Nebraska is one of the nation's top beef-producing states, and much of the corn it produces is used for livestock feed.

Ricketts said meat is nutritionally dense and "part of a traditional, healthy diet." He said three ounces of beef has more protein than three cups of quinoa.

"Who wants to eat three cups of quinoa anyway?" he said.

The Nebraska Beef Passport, managed by the Nebraska Beef Council, features 40 restaurants throughout the state that offer the meat on their menus. It's modeled after the state-run Nebraska Passport Program, a popular yearly initiative where visitors travel to different businesses, museums, parks and other attractions to collect stamps which they can send in for prizes.

The beef program requires restaurant patrons to order a beef item off the menu to earn stamps, which they can submit to the Nebraska Beef Council for the chance to win prizes, including a high-end cooler full of meat.

"Farmers and ranchers are committed to producing high-quality protein in the most sustainable way possible," said George Cooksley, chairman of the Nebraska Beef Council.