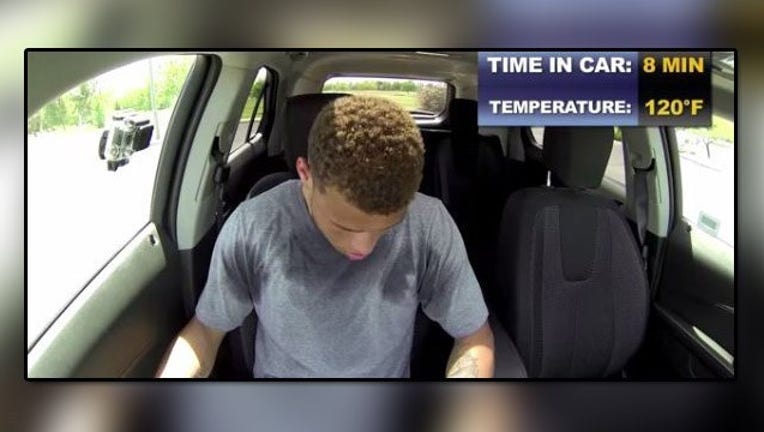 Arizona Cardinals safety Tyrann Mathieu tried to tough it out in a car with the windows up and engine off in the middle of the summer heat. He didn't last very long.

He was demonstrating what it would be like for a dog locked inside a hot car.

Mathieu sat down in the passenger seat of the car in his dry, gray shirt, but after only 4 minutes became visibly uncomfortable. "I seriously couldn't imagine leaving my dog in the car like this," he said. "I can't wait to get out of this car."

As the timer ticked by, the temperature grew quickly. It was 90 degrees outside but within 8 minutes, it was 120 degrees inside the car, and that's when Mathieu bailed. His shirt was soaked.

Mathieu's demonstration was part of a PSA with the People for the Ethical Treatment of Animals, or PETA.

"Dogs are covered with fur and can only cool themselves by panting and sweating through their paw pads," PETA said on its website.

A dog's owner could face charges for leaving a dog in a hot car if the dog becomes distressed. Florida law prohibits anyone from breaking the window to get inside a car, but police say it would be hard to prove criminal intent for rescuing an animal in distress.

If you spot an animal in a hot car, here are a few things you can do: