Florida is expanding the number of Publix locations that will offer the COVID-19 vaccine.

TAMPA, Fla. - As Florida tries to meet the high demand for the COVID-19 vaccine, they're adding to the list of places you can get one. That now includes more than a hundred new Publix locations.

Tuesday, Governor Ron DeSantis said that Florida is leading the country in vaccinating seniors, closing in on 700,000 so far. Statewide, more than a million people have gotten the shot, according to the Florida Department of Health.

Data shows the pace is picking up and DeSantis says that more than 350,000 shots were given out in the first week of January, compared to more than 400,000 last week. 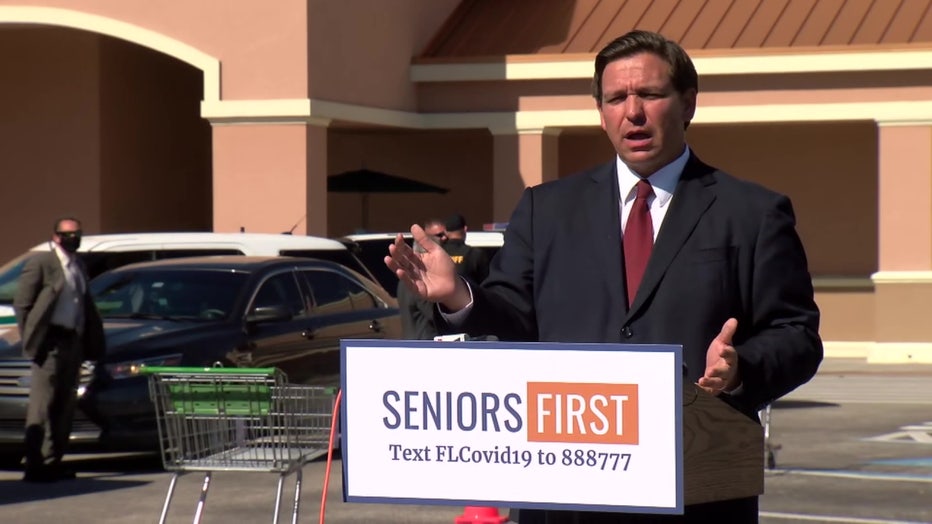 Starting Wednesday morning at 6 a.m., people can go online to make appointments here. The distribution of the vaccine will begin on Thursday.

This Publix program has grown over the past two weeks, starting with just 22 pharmacies in Citrus, Hernando and Marion Counties.

Stores in almost the entire state are participating, except for the immediate Tampa Bay area.

"We're getting better coverage and if I had unlimited vaccines, I'd be willing to do it statewide but I think we will get there eventually," DeSantis said.

The Florida Department of Health says the number of known cases of COVID-19 in the state rose by 9,816 Tuesday. According to the state's daily update, the total number of cases in Florida is now 1,589,097.

As far as the governor is concerned, things are going well here in Florida. He criticized President-Elect Biden's vaccine distribution plan, saying that individual states don't need the federal government interfering, sending down FEMA and the National Guard to set up vaccine clinics.

"If you come in and you tell FEMA to create some type of camp, how long is that going to take?" said DeSantis. "And then are you going to divert vaccines away from my efforts and the efforts here where we're doing 70,000-80,000 people a day now, going at a good clip? I don't think you want to do that and so the more bureaucracy that's involved in this, the worse it's going to be, trust me."