TAMPA, Fla. - Pinellas County has a rare open seat in Congress, and Florida's 13th U.S. House District has been redrawn in a way that gives Republicans a slight advantage in the November midterm. Five Republicans are competing for the nomination in the August 23 primary election, and FOX 13 Political Editor Craig Patrick sat down with all of them.

Christine Quinn is a small business owner who ran as the Republican nominee for U.S House in Hillsborough County’s 14th District in 2016 and 2020.

In our interview, she opposed the COVID vaccine, flu vaccine, and requirements for all childhood vaccines to attend public school. She disputed the scientific consensus on climate change, saying humans cannot change the climate.

She also claimed President Biden is not the legitimately elected President of the United States, and claimed communists have infiltrated our government and Hollywood. 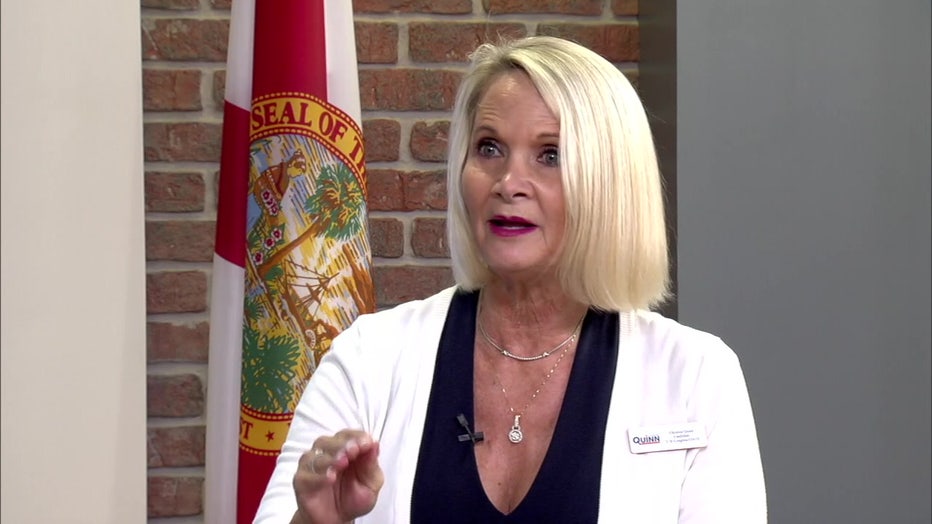 The interview began with a discussion of Quinn’s opposition to the COVID vaccine, flu vaccine, and all vaccines currently required as a condition of students attending public school.

Quinn said her opposition to the flu vaccine is based on her husband’s serious illness in 1998. She said he contracted GBS syndrome in 1998, which she attributes to her husband receiving a flu shot prior to his illness.

"The background rate for GBS in the Unites States is about 80 to 160 cases of GBS each week, regardless of vaccination. The data on the association between GBS and seasonal flu vaccination are variable and inconsistent across flu seasons. If there is an increased risk of GBS following flu vaccination it is small, on the order of one to two additional GBS cases per million doses of flu vaccine administered."

Craig Patrick cited that information from the CDC in the interview. Quinn responded by questioning the validity of CDC information.

"The CDC doesn't have all the answers, and the CDC has been wrong on many things. So I would argue with the CDC," said Quinn. 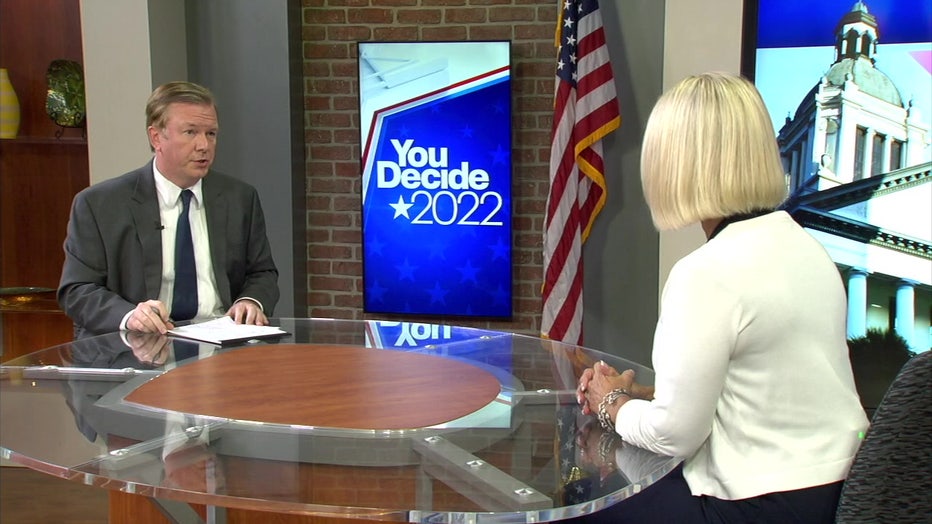 The CDC also provides detailed information regarding the safety and efficacy of vaccines required vaccines for children to attend public school (https://www.cdc.gov/vaccines/parents/index.html).

Quinn opposes all vaccine requirements for students in public school. Here is an excerpt from that part of the interview.

Craig Patrick: "So should they be required as a condition of entering school?

Christine Quinn: "No, no, no, no. None of them. There is no way you're going to tell me that we need to give healthy children that have strong immune systems a vaccination. These vaccinations are deadly. These vaccinations have side effects. I know because I have two vaccine injured children in 1984 and a half, they went and got the MMR. I took my daughter, Alison, Camden and Nicole, all three of them from the same batch. My middle daughter didn't want to get them. She was scared. You know what my pediatrician said… Don't worry about it. They don't really need them. So she did not get it. Three weeks later, my oldest daughter, Camden, was in the hospital with spinal meningitis and almost died. My infant baby that was only ten months old at the time, started having grand mal seizures. These were healthy babies. Healthy children. I was healthy. My husband was on the Olympic water polo team. We were healthy. We were in fitness. I taught health and fitness. I taught Mommy and me at the YMCA. We were a healthy family. We ate healthy. We did everything healthy. We didn't drink. We didn't do drugs. Healthy babies. Now they're sick. My daughter almost died."

Craig Patrick: "Let's move on to your take on climate change, because you have stated mankind is arrogant if we believe for one second they can change the climate. Do you concede, though, that the climate has in fact changed since the late 1800s, that it has increased… the average global temperature 1.1 degrees Celsius?" 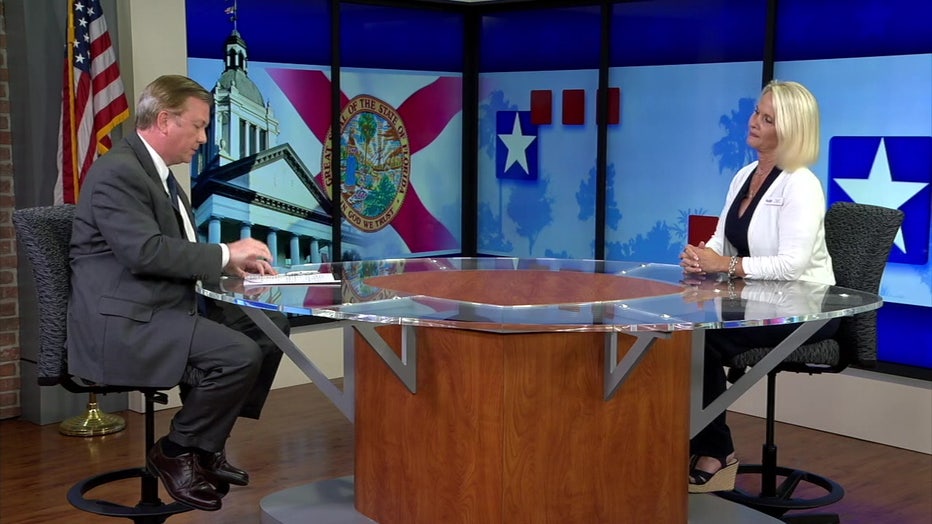 Christine Quinn: "So this is really a hot topic for me because I'm going to tell you what, man is arrogant If they think for one second they're going to change the climate. We live in seasons. The climate has been changing since Earth was made and invented by God. It was created. It's a living, moving, going around, going around, going around. It continuously is moving and changing constantly. This is hence why we have seasons. We have winter, spring, summer, fall, period. We are not can control that what we can control is the pollution and the damages that we do for mankind, manmade chemicals and other things that are going into the earth. But we're not going to change the climate, and we got to quit saying, How are you going to stop the sun? How are you going to stop the sun?"

Craig Patrick: "So you deny the science that shows that greenhouse gas emissions are warming the planet by forming a blanket around it, trapping and more and more of the sun's heat."

Christine Quinn: "There is more to that. That's not those are not just like yes or no clean cut."

Craig Patrick: "It is pretty clean cut. Yes or no?"

Christine Quinn: "I would say no. First of all, we're not. What do they keep telling and trying to cram down our throats? Oh, well, the sea level is raising, or the sea level is descending. I mean, whatever statistic is very subjective to the person that's providing the evidence and then the person that is fighting against it. It is very subjective. At the end of the day, we're not going to change the climate. We're not going to change it. We've got to quit fearmongering these people. Climate change is the number one thing. The climate is different here. I'm breathing different air, air over there and it's racist. I mean, this is ludicrous. When are we going to start talking about real things that really matter?"

Craig Patrick: "Do you believe President Biden is the legitimately elected President of the United States?"

Christine Quinn: "No, absolutely not. There's no way you're going to tell me. I went to rally after rallies."

Quinn on Communism and Free Speech

Craig Patrick: "You stated ‘we need to stop communism in America, communism is here. We're seeing it’. How are we seeing it?"

Christine Quinn: "Well, look at our country. Do we have freedom of speech? No."

Craig Patrick: "Well, we have classes. We don't have communal ownership of the means of production. Specifically, when you say communism, what do you mean?"

Christine Quinn: "Well, we don't have freedom of speech. We're being told what to do, when to do it. Get a mask. Don't wear a mask…. Get a shot. Don't get a shot. They're telling our children that they have to wear a mask. Our school board just board voted again to put mask on our children…"

Craig Patrick: "Do you think there are known or suspected communists in state or federal government?"

Christine Quinn: "Oh, absolutely. Absolutely. We have communist in our government right now. You know, communism has always been here and we welcome them with a parade. They came in as scientists. Hitler didn't die. He just moved to America. I mean, he literally died, but his movement moved to America. It's been here. It's always been here. But now we're just seeing it rears its ugly head. And yes, it's being censored right now, right here, through everything that we're doing, we have eyes on us, for crying out loud. They just went and the FBI went into a former president home. And then that just blows my mind. There's not even words for that. And if they can do that to President Trump, they can do that to you, too…"

Craig Patrick: "If you are elected to Congress, would you pursue or initiate a House committee on un-American activities?"

Christine Quinn: "Absolutely. Without a doubt."

Craig Patrick: "You would revive McCarthyism?"