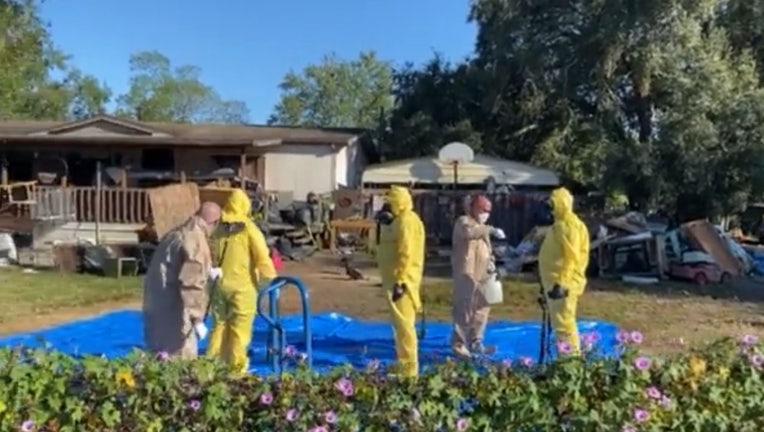 MIDDLEBURG, Fla. - Crews rescued more than 200 dogs, rabbits and other animals from a north Florida home with "deplorable conditions" on Monday, officials said.

Clay County Sheriff Michelle Cook said a search warrant was served early Monday at the home in Middleburg. An investigation began several weeks ago after paramedics were called to the home for a medical emergency for someone living there.

Inside the home, officials found animals in cages, and the stench of animal waste, the sheriff said. The home was also filled with fleas. Livestock, including rabbits, pigs and chickens, were also found on the property.

"They observed conditions that rose to the level that required additional investigation," the sheriff said.

Video posted on social media by the sheriff's office shows investigators wearing biohazard suits as they removed animals from the property.

Officials told Action News Jax the suits were necessary for the protection of the rescuers, because the animals may have been contaminated and carrying diseases.

RELATED: Dog rescued by firefighters after getting head stuck in iron door

The sheriff's office said the property was so extensive that they didn't know exactly how many animals needed help until after they arrived.

"We’re glad these animals are finally getting the care they need," the sheriff said. "This is still very early in our investigation, and the results of that will determine any potential charges and arrests."