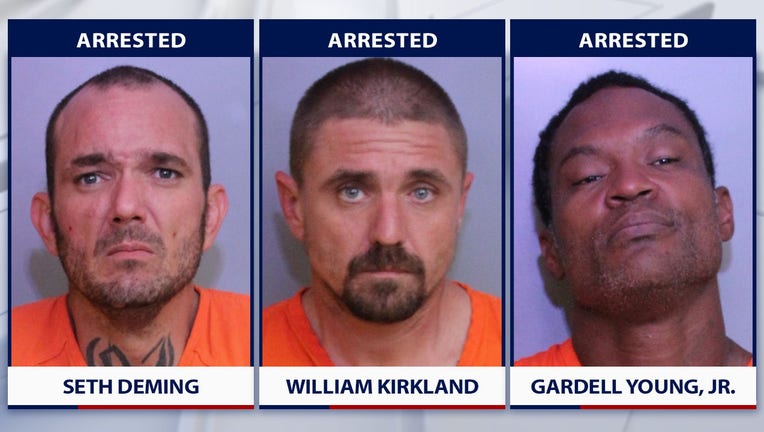 LAKELAND, Fla. - Polk County deputies have arrested Gardell Young Jr., 42, William Kirkland, 37, and Seth Edward Deming, 38, after they say the three men shot one person and threatened to shoot a family during a 24-hour crime spree in Lakeland.

According to deputies, a family called 911 on Tuesday night after three men entered a home where they were renting a room on Old Harden Blvd., pointed a gun at them, and demanded that they leave. Deputies say the suspects escorted the family outside at gunpoint and told them they could find their belongings in the yard later.

The family told deputies they had been renting at the home for more than a month and did not know the men. The family fled to a nearby home and called 911.

Deputies say when they arrived, they found Young and Kirkland throwing clothing and other items onto the driveway. The third suspect, described by the victims as a tall white male, was no longer on the scene when deputies arrived.

While deputies interviewed the suspects, they noted that the suspects looked like the same suspects wanted in a shooting that occurred on Monday evening at a nearby gas station.

PCSO says evidence from the shooting led detectives to the suspect’s vehicle, a black GMC SUV, involved in that investigation.

Deputies say the vehicle was registered to William Kirkland. The victims of the armed burglary also told detectives the suspect who fled from that scene left in a black GMC SUV.

During the incident on Monday night, a male victim was shot in both legs while at the Circle K store located at 933 West Pipkin Road in Lakeland, near Old Harden Blvd. After being shot, he went to a house nearby and the homeowner called 911. The victim was taken to Lakeland Regional Medical Center, where he received treatment for his injuries and is expected to recover.

According to the victim, witnesses, and video surveillance system at the Circle K store, the victim was hanging out at the store waiting for his friend to get off work. A black GMC SUV occupied by three men pulled up to a gas pump. Deputies say, one man, later identified as Young, pumped gas while the other two occupants went into the store. The victim talked to one of the other occupants, later identified as Deming, deputies said.

The victim then walked across the parking lot and Deming got out of the car and followed him. Deputies say Deming then shot the victim, once in each leg. He went back to the GMC, and all three suspects left the scene.

Deputies responded to the area, set up a perimeter, and began an investigation. They were still actively investigating the shooting when the armed burglary occurred the next day, according to PCSO.

On Wednesday afternoon, deputies said they located Deming as he was driving the black GMC SUV. They surrounded the vehicle and took him into custody.

All three suspects have a criminal history.