Content warning: Graphic portions of this video have been removed, however, some may find the images disturbing.

LARGO, Fla. - A pedestrian was killed when a Pinellas County deputy accidentally ran him over while responding to a scene, the sheriff's office said Thursday.

Video of the incident shows the incident, which happened Wednesday night in front of 6363 Ulmerton Road in Largo.

The Pinellas County Sheriff's Office said K-9 Deputy Alexander Edge was driving a fully-marked agency vehicle, a Chevrolet Tahoe, and was responding to a scene where suspects had reportedly fled, on-foot. 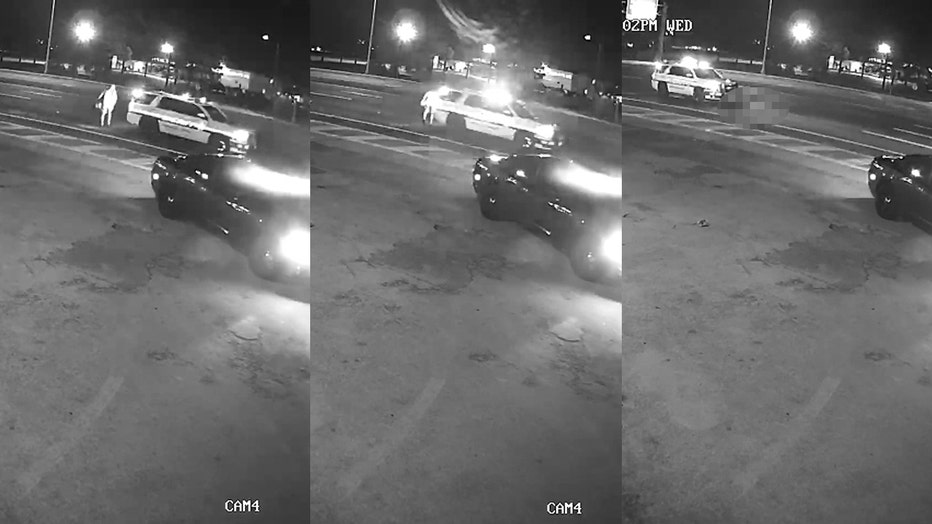 The vehicle's emergency lights and sirens were activated, the sheriff's office said.

Edge was driving west on Ulmerton Road, just west of US-19, as he approached the scene where the suspects were thought to have been. The video shows the vehicle stop on the roadway near a parked, unmarked sheriff's office vehicle, which had emergency lights activated in the window.

The vehicle begins to back up. At the same time, a pedestrian walking west began to cross Ulmerton Road in a northward direction, behind where the deputy's vehicle stopped.

After the vehicle crosses over the pedestrian, 59-year-old Barry Fick, it begins to pull forward before coming to a stop. Another deputy runs over from the scene where Edge was responding.

Investigators say Fick had just bought items at the 7-Eleven at 6333 Ulmerton Road before he started walking toward Ulmerton Road to cross. There was no crosswalk visible in the video, at the location where Fick began to cross.

The sheriff's office said Fick's position near the back of the vehicle did not trigger the vehicle's back-up camera or audible back-up alert. According to the timestamp on the video, two seconds elapse between the time Edge's vehicle stops and then begins to back up, and the moment Fick begins to run across the roadway behind Edge's vehicle and is struck.

Deputy Edge and his K-9 partner were not injured in the crash.

Investigators said alcohol may have been a factor, involving Fick, but they did not provide further details.

Fick was taken to Bayfront Health in St. Petersburg and died the next morning.