LARGO, Fla. - Pinellas County Sheriff Bob Gualtieri says trying to turn police officers into mental health professionals is like trying to jam a round ball through a square hole.

“You’re asking people to do something they’re the least qualified to do, so let’s get the qualified people out there with the cops,” he said.

The Pinellas County sheriff announced Wednesday his county will be expanding its mental health unit.

There will be six total crisis response specialists, plus a corporal and sergeant for the unit, along with eight law enforcement officers.

The sheriff's office has had a mental health unit since 2016. What’s been missing, Gualtieri says, is organized case management.

“It just creates a revolving door that so often ends in the problem winding up in a law enforcement officer’s lap at 3 o’clock in the morning, when the symptoms of mental illness cause the person to lash out and sometimes commit a crime,” Gualtieri said. 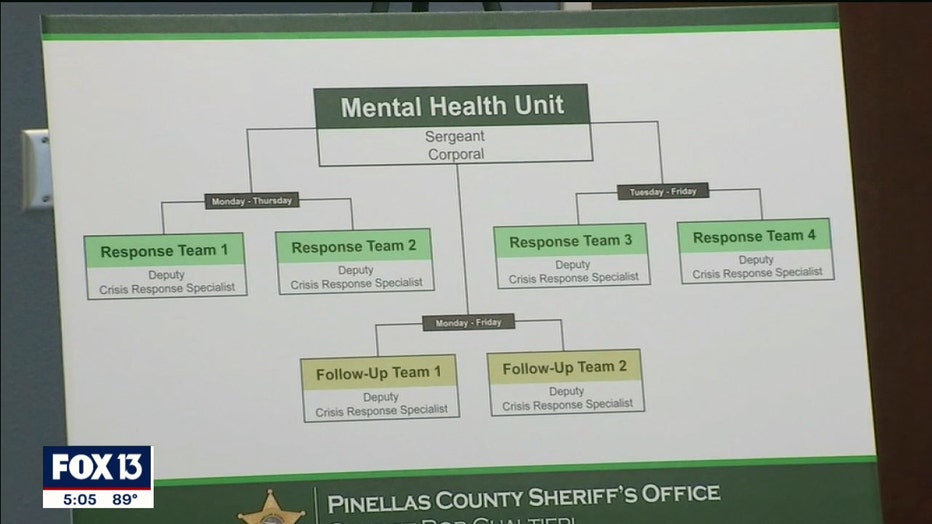 In this new format, an officer and crisis response specialist will go out on a call and perform an initial assessment together. The sheriff says having the specialist there will free up the deputy to focus on law enforcement issues, should there be any.

“The follow-up team will then go off and assess the person, or pass it off to more intensive case management,” he said.

Pinellas County is not alone.

Earlier this month, Tampa police announced it's working with the city council on a mental health response plan. To start, TPD is getting information on how existing programs run at seven other police departments across the country.

St. Pete Police had pledged to hire 20 to 25 social workers to start by October, but then pushed that date back to January.

Gualtieri says, there has long been a problem with officers taking people into custody under the Baker Act -- for mental health reasons -- who should not have been remanded in the first place.

Every year in the state of Florida, 200,000 are taken into custody under the Baker Act, including around 11,000 in Pinellas County.

“About 50% of those are done by law enforcement,” Gualtieri said. “Pinellas County responds to about 5,000 mental health calls each year.”

Another big part of the problem, he says, is the amount of time spent on mental health training in the police academy. During the six months of training, only about 16 hours are dedicated to issues surrounding mental health.