TAMPA, Fla. - The Tampa Police Department has released body camera video of an officer who was fired for using "derogatory language" on two occasions last year.

Now, the police union representing White is fighting to get his job back. The police union says TPD went too far, but TPD says White broke department policy.

Union officials told FOX 13 News they do not condone the language used by White, but that its use shouldn’t have been a fireable offense. 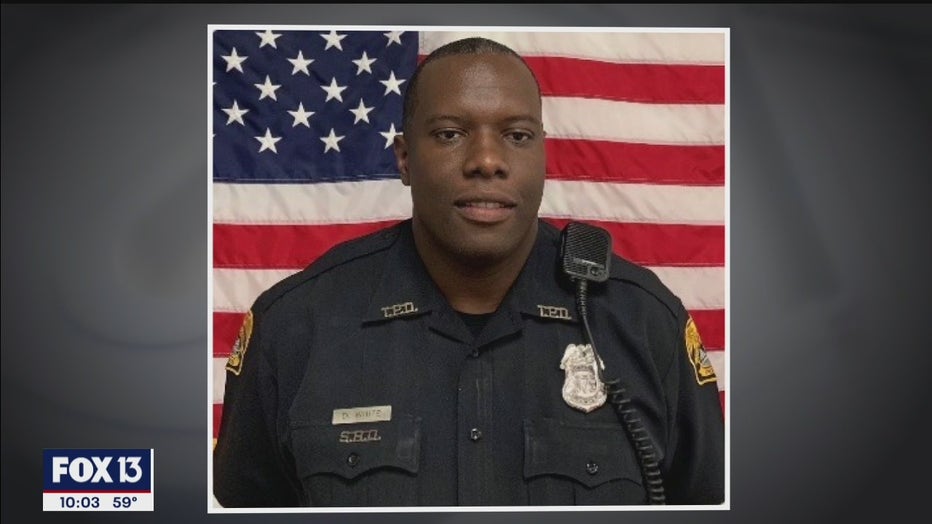 The offenses in question happened on two separate dates in November 2020.

On one occasion, White can be heard on his bodycam talking to his wife while he drives home from work. He uses a racial slur during the conversation, but apparently not referring to any specific person.

On another occasion, White, who was working as a school resource officer, uses the same racial slur while addressing a man he is placing under arrest for trespassing.

According to the police union and TPD, body-worn camera footage is periodically and randomly reviewed. TPD says when White was confronted about using the racial slur during the phone call, he admitted to using the same slur during the trespassing arrest.

"Derogatory statements made by police officers jeopardize the trust that our department works to establish with our community.  Tampa police officers are held to a higher standard and incidents like this negatively impact the entire law enforcement profession."

"No one is excused from using the ‘N’ word in any way. It doesn't matter what your color is or what your position is," said Danny Alvarez, of the Tampa Police Benevolent Association, referring to White being a Black man. "We just simply believe that the punishment that he's receiving does not equal the actions and the reasons that we’re here [for] today."

Alvarez says educators, pastors, and other members of the community say officer White is well-respected. He also says this case is unique.

"No one complained. This case is a case where there was no complaining. It was found under a review of body camera that was allegedly random," he said.

The Hillsborough County NAACP agrees with the union's stance, telling FOX 13 no one should use the racial slur, but being fired was too strong of a punishment.

"It’s in the music, and people use it, African American people use it as a term of, sometimes, just speaking to one another and sometimes it’s used as just a casual word in conversation," Lewis explained.

She says officer White needs to be punished -- but not fired -- and is hopes this can start an important conversation about diversity in policing.

The police union says a hearing to see if White can get his job back won't happen for about two months.