Leaders for both groups left Monday feeling very good about what transpired. The panel event ended up being a 3-hour-long discussion between local black leaders, law enforcement and members of the public. One of the organizers here were some heated exchanges when the floor was opened up to the members of the public to speak.

Al Lewis is a community member who organized Monday's discussion. She says when she reached out to law enforcement and other panelists, she was very clear that Monday was going to be tough and that the discussion was not meant to be easy.

“We have some issues we are working through and I feel like they were expressed tonight and we got through them, but there is still more to be done in order to become one Lakeland," Lewis said.

The event featured an 8-person panel, including the Lakeland mayor, members of Lakeland Police, members of the Polk County Sheriff’s Office as well local black pastors and local leaders with the Black Lives Matter organization. 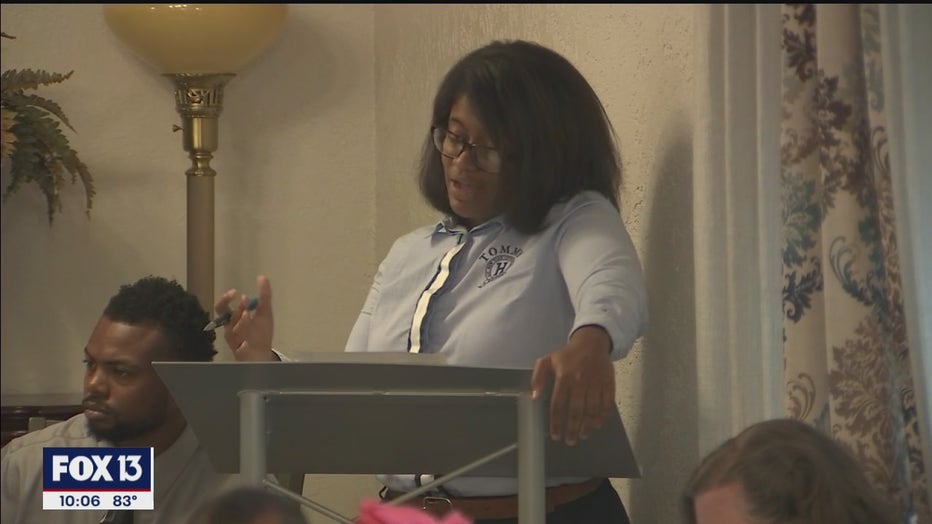 “I think it went good. I think we got a lot of dialogue out on the table. It’s not uncommon to ask. We do these meetings every month with all of our neighborhoods. This was just an opportunity to talk to a different group of people," Lakeland Police Chief Ruben Garcia said.

The panelists who came out Monday seemed to all agree change is necessary and agree it starts by having discussions like Monday's.

The dialogue between leaders, officers, and activists has become more productive since large rallies across the country, including this weekend’s protest which attracted several thousand people to Munn Park in Lakeland.

“I think it went better than we expected,” Jarvis Washington, founder of Black Lives Matter Polk Restoration told FOX 13 about the weekend demonstration.

The protests at the park the previous weekend was marred by what happened afterward. A splinter group blocked Memorial Blvd. and Lakeland police used tear gas and rubber bullets to disperse the crowd.

Black Lives Matter Polk Restoration has a list of issues it plans to discuss with law enforcement. At the top of the list is how it says black people are treated.

“Right here, it’s not equal here in Florida, and that’s just what it is,” said Lewis.

The organization also wants law enforcement officers to have more cultural and diversity training, take additional classes on the use of force, be afforded greater opportunity to start black-owned businesses, and have the name changed from Imperial Polk County to just Polk County because it is more inclusive.

They also want what they see as justice for several African American men who they say were mistreated by officers.