LAKELAND, Fla. - More than 80 Lakeland area veterans touched down in the nation's capital to spend the day touring their war memorials.

While 04:00 was the arrival time for dozens of the Polk County-based veterans on April 26, some were so excited that they arrived as early as 2:30 or 3 a.m.

"I’m looking forward most to seeing the Changing of the Guard at Arlington," said 94 year-old WWII Veteran William Sullivan.

The veterans touched down in Washington DC just after 8 a.m., and after loading the tour buses, the first stop was the World War II Memorial. On the trip were two of the Greatest Generation – 94-year-old William Sullivan and 103-year-old Herman Jenkins. Both had never seen their memorial.

"What’s running through my mind is how fortunate I am that I am still here, and the good Lord kept me here for many years after that," said Jenkins, who celebrated his 103rd birthday on April 2.

"It’s just amazing," said Sullivan. "I’ve seen this memorial on television, on the news for a long time, and I never thought I’d be here. It’s amazing."

From there, the veterans had the chance to explore the Lincoln Memorial, and nearby Korea and Vietnam Memorials. 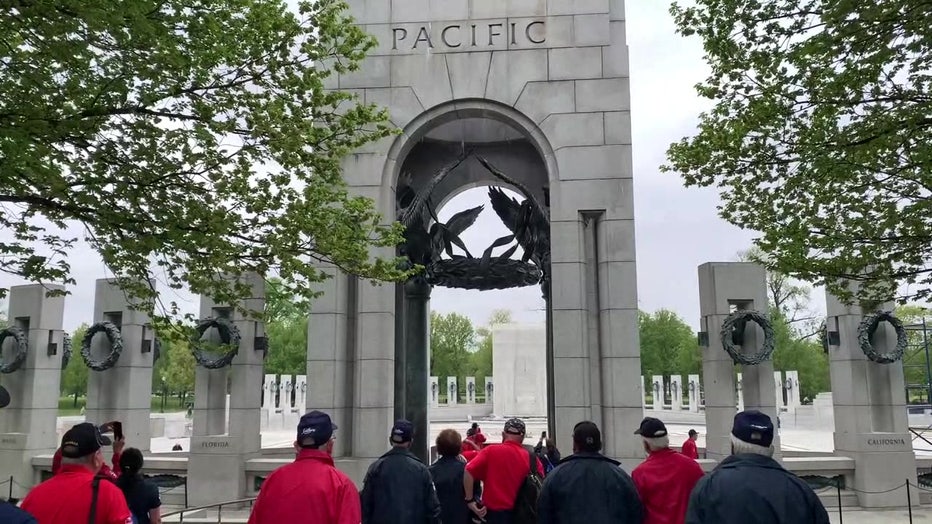 Vietnam Veteran James Giallombardo spent a while at his memorial taking impressions of names he served alongside.

"This is the second time I’ve been here," he said. "The first time, to me, I could hardly stand… I cried and cried," he said, getting choked up. "I didn’t think I was going to do that today."

Of the 87 veterans that are on the flight, more than 70 of them were Vietnam Veterans. And many of them said they have not yet seen their memorial in-person.

This is the first time Angel Marcano found his cousin’s name etched in the black granite wall. He paused afterwards to salute, and then began to tear up.

"I see faces. I see the faces of the men that I knew," he said. "The men who never made it back."

These men who did, didn’t take a moment of this day for granted – even sticking it out through the pouring rain at Arlington Cemetery’s Changing of the Guard.

On the flight home came the mail call, where veterans got to open thank you letters from their family. But the welcome home was perhaps the biggest surprise of them all. Hundreds of men, women and children gathered on the tarmac of Lakeland Linder International Airport to greet their veterans, who were returning from a full day with the fullest of hearts.

Flight to Honor has been flying veterans and a guardian to Washington DC for the last seven years out of Polk County. Any eligible veteran is welcome to apply for a flight. You can learn more at: https://www.polkveteranscouncil.com/flight-to-honor.html