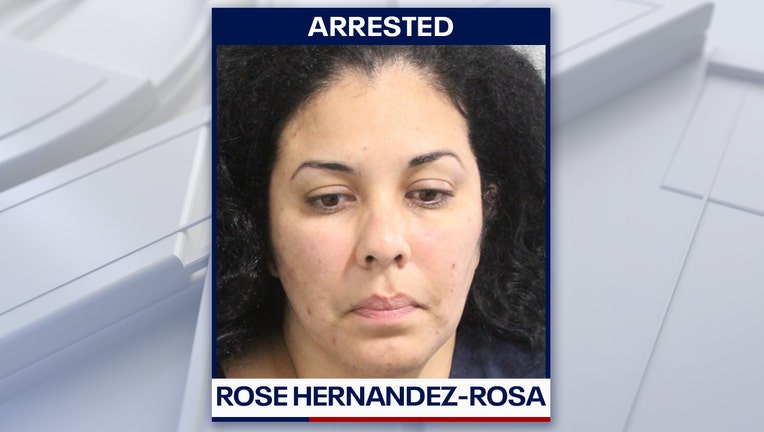 HAINES CITY, Fla. - A Polk County Schools employee is behind bars after police say she stabbed her boyfriend to death in their apartment.

Officers responded to Hernandez-Rosa's 911 call around 1:30 a.m. Friday to find her live-in boyfriend, 34-year-old Joyssie Weayne Colon Candelaria, lying in a puddle of his own blood in a bathroom at the Parkview Village apartment the two shared.

Polk paramedics responded to the scene and pronounced Colon Candelaria dead around 2 a.m.

Detectives found a single puncture wound to his left collarbone area. An autopsy revealed he was fatally stabbed in an artery, which caused him to bleed out. Blood was also found throughout the bathroom, including on the walls and the bathtub, police said.

Investigators said Hernandez-Rosa initially claimed she found her boyfriend lying face down before calling 911. She told detectives he was a cocaine user but denied ever seeing him use the drug. No cocaine was found at the scene.

Hernandez-Rosa said the two were involved in a physical altercation earlier in the evening but denied stabbing him until she was shown a picture of the wound.

She then told investigators that during the fight, she had a pair of scissors in her hand and used them to stab Colon Candelaria. She told detectives that after stabbing him, she ran into her bedroom and locked the door.

Haines City police said Hernandez-Rosa gave multiple accounts of what she did with the scissors, first saying they were in her bedroom before later claiming ot have thrown them in a community dumpster. Investigators never found the scissors.

The couple had a history of domestic violence, police said, which included Colon Candelaria being arrested in 2018. Hernandez-Rosa said the two have not slept in the same room for three months because of continuous fighting. Neighbors told detectives that the two fought almost daily.

One neighbor, who could see into the apartment, claimed to see Hernandez-Rosa strike Colon Candelaria repeatedly. Hernandez-Rosa told detectives she acted in self-defense. Police said there was no evidence that she suffered any injuries during the altercation.

Investigators said a child was present in the apartment at the time but did not witness the fight.

"Because of the thorough, diligent and outstanding work of our detectives, we were able to make an arrest in this case," Interim Police Chief Loyd Stewart said. "If you're a victim of domestic violence, whether you're female or male, I implore you to seek the available resources and get out of these relationships."

Hernandez-Rosa is charged with second-degree homicide and tampering with evidence.