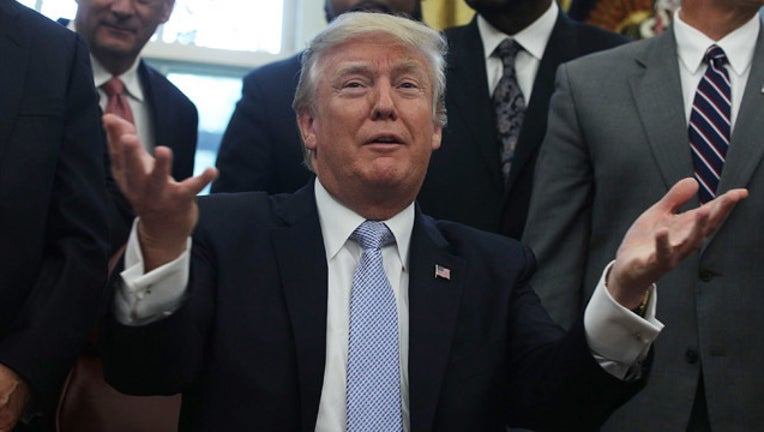 President Donald Trump has declared Sunday, September 3, 2017 as a National Day of Prayer.

President Trump is urging Americans to offer prayers for all those harmed by Hurricane Harvey, including people who have lost family members or been injured, and those who have lost homes.

The National Day of Prayer is also meant to serve as a thank you to those performing acts of service, including first responders, law enforcement officers, military personnel, volunteers and medical professionals leading the response and recovery efforts.

The president was joined in the Oval Office by leaders of the Salvation Army, the American Red Cross and Southern Baptist Disaster Relief when he signed the proclamation declaring Sunday a National Day Of Prayer.

The following was released from the Office of the Press Secretary at the White House:

BY THE PRESIDENT OF THE UNITED STATES OF AMERICA

Hurricane Harvey first made landfall as a Category 4 storm near Rockport, Texas, on the evening of August 25, 2017.  The storm has since devastated communities in both Texas and Louisiana, claiming many lives, inflicting countless injuries, destroying or damaging tens of thousands of homes, and causing billions of dollars in damage.  The entire Nation grieves with Texas and Louisiana.  We are deeply grateful for those performing acts of service, and we pray for healing and comfort for those in need.

Americans have always come to the aid of their fellow countrymen -- friend helping friend, neighbor helping neighbor, and stranger helping stranger -- and we vow to do so in response to Hurricane Harvey.  From the beginning of our Nation, Americans have joined together in prayer during times of great need, to ask for God's blessings and guidance.  This tradition dates to June 12, 1775, when the Continental Congress proclaimed a day of prayer following the Battles of Lexington and Concord, and April 30, 1789, when President George Washington, during the Nation's first Presidential inauguration, asked Americans to pray for God's protection and favor.

When we look across Texas and Louisiana, we see the American spirit of service embodied by countless men and women.  Brave first responders have rescued those stranded in drowning cars and rising water.  Families have given food and shelter to those in need.  Houses of worship have organized efforts to clean up communities and repair damaged homes.  Individuals of every background are striving for the same goal -- to aid and comfort people facing devastating losses.  As Americans, we know that no challenge is too great for us to overcome.

As response and recovery efforts continue, and as Americans provide much needed relief to the people of Texas and Louisiana, we are reminded of Scripture's promise that "God is our refuge and strength, a very present help in trouble."  Melania and I are grateful to everyone devoting time, effort, and resources to the ongoing response, recovery, and rebuilding efforts.  We invite all Americans to join us as we continue to pray for those who have lost family members or friends, and for those who are suffering in this time of crisis.

NOW, THEREFORE, I, DONALD J. TRUMP, President of the United States of America, do hereby proclaim September 3, 2017, as a National Day of Prayer for the Victims of Hurricane Harvey and for our National Response and Recovery Efforts.  We give thanks for the generosity and goodness of all those who have responded to the needs of their fellow Americans.  I urge Americans of all faiths and religious traditions and backgrounds to offer prayers today for all those harmed by Hurricane Harvey, including people who have lost family members or been injured, those who have lost homes or other property, and our first responders, law enforcement officers, military personnel, and medical professionals leading the response and recovery efforts.  Each of us, in our own way, may call upon our God for strength and comfort during this difficult time.  I call on all Americans and houses of worship throughout the Nation to join in one voice of prayer, as we seek to uplift one another and assist those suffering from the consequences of this terrible storm.

IN WITNESS WHEREOF, I have hereunto set my hand this first day of September, in the year of our Lord two thousand seventeen, and of the Independence of the United States of America the two hundred and forty-second.