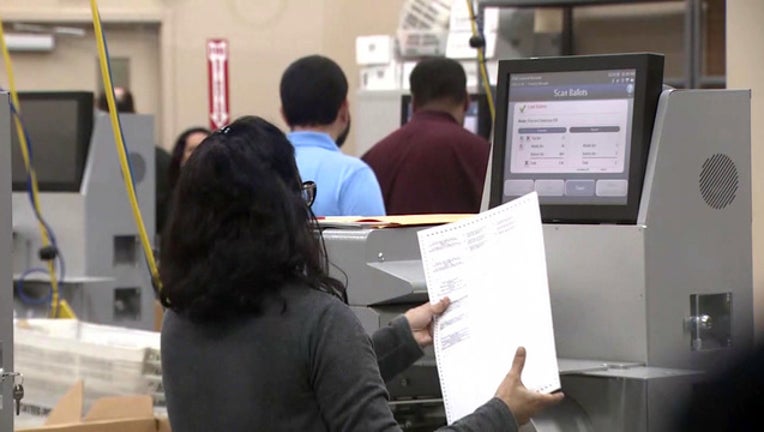 U.S. District Judge Mark Walker’s ruling came hours before a 3 p.m. Thursday deadline for a machine recount to be completed in the U.S. Senate race between Nelson and Republican Gov. Rick Scott, whose 56,000-vote election-night lead had dwindled to fewer than 13,000 votes when the recount was ordered.

The lawsuit focuses on part of Florida law that requires signatures on mail-in and provisional ballots to match signatures on file with elections offices. Voters whose ballots are delivered by 5 p.m. the day before an election have the opportunity to “cure” signature mismatches. But people whose mail-in ballots are received after that, or voters who cast provisional ballots on Election Day, do not.

County canvassing boards make decisions about whether signatures match, and thus whether ballots should be counted. But counties don’t have uniform regulations to govern the decisions, Democrats argued, making the process unconstitutional.

“The precise issue in this case is whether Florida’s law that allows county election officials to reject vote-by-mail and provisional ballots for mismatched signatures --- with no standards, an illusory process to cure, and no process to challenge the rejection --- passes constitutional muster. The answer is simple. It does not,” Walker wrote in a 34-page order.

Walker called the opportunity to fix a ballot “the last chance a vote-by-mail voter has to save their vote from being rejected and not counted.”

“Florida law provides no opportunity for voters to challenge the determination of the canvassing board that their signatures do not match, and their votes do not count,” he wrote.

In contrast, the law allows voters or candidates to challenge signatures that were accepted, Walker noted.

“We are immediately appealing this baseless decision and we are confident we will prevail in the Eleventh Circuit,” Scott spokeswoman Lauren Schenone said in a statement.

During a lengthy hearing Wednesday, Florida Division of Elections Director Maria Matthews testified that 45 counties tossed a total of 3,668 mail-in ballots and 93 provisional ballots due to mismatched signatures. Two large counties --- Duval and Miami-Dade --- had not reported their results, and Walker estimated about 5,000 ballots statewide would have been rejected.

There are dozens of reasons for a signature mismatch, even if the person signing is the voter, Walker wrote.

“What this case comes down to is that without procedural safeguards, the use of signature matching is not reasonable and may lead to unconstitutional disenfranchisement,” the judge wrote.

Although the signature matching process is problematic, Walker said he couldn’t think of another way for canvassing boards to confirm voters’ identities.

“What makes Florida’s signature matching process even more problematic is that fact that counties have discretion to apply their own standards and procedures,” he wrote. “The only way such a scheme can be reasonable is if there are mechanisms in place to protect against arbitrary and unreasonable decisions by canvassing boards to reject ballots based on signature mismatches.”

Two years ago, Walker struck down a previous law that allowed voters who had not signed their mail-in ballot envelopes to “cure” the ballots but did not allow voters with mismatched signatures the same latitude. The law was subsequently changed.

But the judge said in court Wednesday that the law hasn’t been fixed.

“The cure period was intended to solve the inherent problems in signature matching, but the opportunity to cure has proven illusory,” he wrote in Thursday’s ruling.

Voters whose ballots were rejected were notified after it was too late to fix them, Walker wrote.

“Without this court’s intervention, these potential voters have no remedy. Rather they are simply out of luck and deprived of the right to vote. What is shocking about Florida law is that even though a voter cannot challenge a vote rejected as illegal, any voter or candidate could challenge a vote accepted as legal,” he added.

The state’s “scheme unconstitutionally burdens the fundamental right of Florida citizens to vote and have their votes counted,” he decided.

Lawyers representing Secretary of State Ken Detzner, the National Republican Senatorial Committee and Attorney General Pam Bondi’s office argued, among other things, that the plaintiffs waited too long to file the lawsuit. Walker rejected that argument.

The Republicans also argued that requiring extra ballots to be counted will unduly burden the election and disrupt election procedures, thus eroding the public’s confidence in the electoral process.

But, quoting from a federal judge in a Georgia case involving a dispute between gubernatorial candidates Stacey Abrams and Brian Kemp, Walker wrote that he “does not understand how assuring that all eligible voters are permitted to vote undermines the integrity of the election process.”

Any hardship endured by the state is “outweighed by the risk of unconstitutionally depriving eligible voters of their right to vote and have that vote counted,” he found.

Walker stressed that he was not requiring counties to count all of the ballots rejected for signature mismatches, but he ordered them to give “the limited number of affected voters” the opportunity to fix them before the “second unofficial results” are due at noon Sunday, following a manual recount.

So far, that involves just over 4,000 rejected ballots, Walker wrote.

“The county supervisors of elections and canvassing boards are surely up to the task,” Walker wrote.