No more mask mandate in Sarasota

SARASOTA, Fla. - The city of Sarasota voted to let its mask ordinance expire next week, and it comes at a time when public health leaders are warning against easing up COVID-19 restrictions.

City commissioners voted not to extend the ordinance Wednesday, arguing that the city can’t fine people for not wearing a mask.

"The reality is that the governor stripped us of our ability to enforce this ordinance, period," said Hagen Brody, the Sarasota city mayor.

But some disagree with letting the ordinance go away.

"It is our job to look after the health safety and welfare of our citizens not whether we can enforce it but to tell our citizens we want to keep you safe," said Jen Ahearn-Koch, a Sarasota city commissioner.

Sarasota doctors wrote letters to city leaders, hoping to hit that point home. Public health experts said it is the wrong time to ease up.

"Cases are declining because they are wearing masks and there’s still physical distancing being practiced by people, and that is the major reason why cases are trending downwards," said Dr. Edwin Michael of USF Health.

Michael developed a coronavirus modeler and said it shows just how sensitive the virus is to restrictions.

"If we release the social measures just by 10%, the cases will decline but the ending will be extended," said Michael. 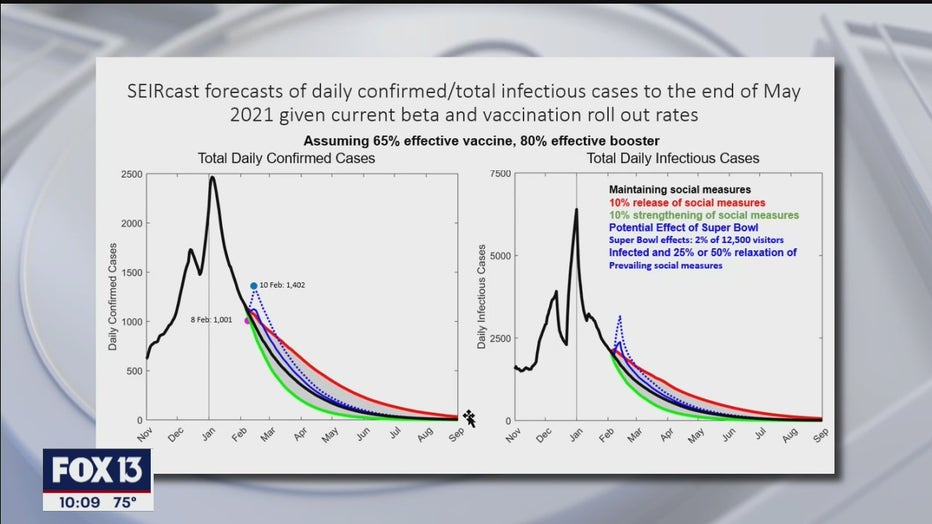 Other counties like Hillsborough and Pinellas still have mask ordinances in place.

"It is the social measures that are protecting us, and that is a strong message I think the public needs to hear," said Michael.

In Sarasota, some city leaders said people who want to wear a mask will wear one, and it’s up to businesses whether to enforce it.

"The idea that wearing a mask for 30 seconds entering a restaurant and then removing it will eliminate COVID concerns is on its face ridiculous," said Erik Arroyo, the city’s vice mayor.

The city’s mayor said during the meeting that the city could not enforce a mask mandate in public spaces.

"And at this point, everybody’s been educated on the benefits of wearing a mask," said Brody.

Sarasota city commissioners said they are willing to bring a mask ordinance back if the governor allows cities to enforce them. The ordinance expires on February 25.