SARASOTA, Fla. - A knock at the front door Monday afternoon brought an unexpected visitor to a Sarasota home.

The homeowner came to the door and asked, "What can I help you with?"

The unidentified man responded, "I'm not sure if you received the notice in the mail. We are doing work for the neighbor, we are putting up a new fence."

The surveillance camera at the home, off West Royal Flamingo Road in Bird Key, captured the interaction around 4:30 p.m. Monday. 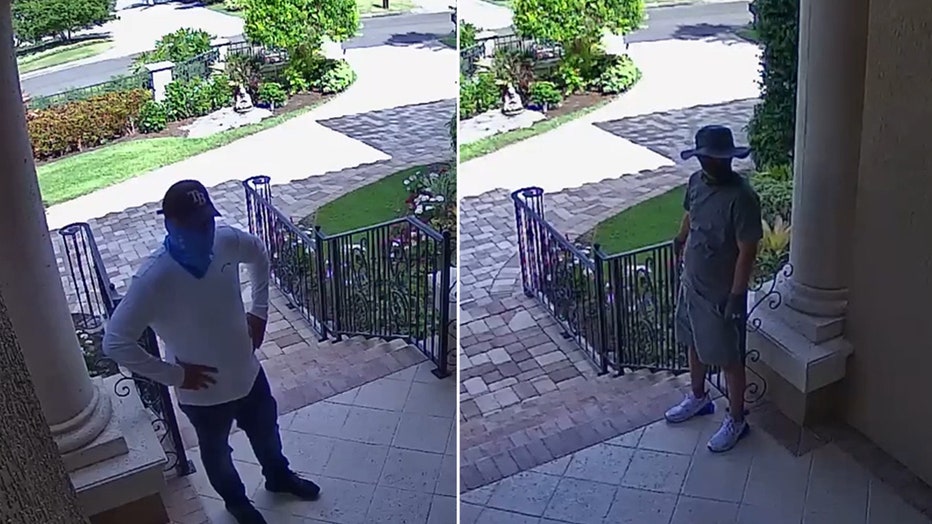 Wearing a neck gaiter and a long-sleeved shirt, the man's identity is concealed.

He brings the homeowner outside. When they are out of sight, another man with a walkie-talkie shows up, knocks, and then walks into the home.

Before he gets too far inside, the homeowner's wife confronts him.

Two unidentified men claimed they needed to take measurements of a Sarasota homeowner's property to improve a neighbor's fencing -- but those neighbors never requested the service, police said. Detectives said it was likely a distraction scam and are searching for the two men seen in the homeowner's surveillance video.

"She asked what he is doing. The second man ends up leaving, talks to the first man on a walkie-talkie, explains they have another job to go to and they leave right away," said Genevieve Judge with the Sarasota Police Department.

The men left in a white Chevy Tahoe, with an Uber sign on its side.

The homeowner called his neighbor and learned there was no work scheduled.

Officers with Sarasota police believe the men are crooks.

"We typically believe this is a type of distraction crime," said Judge.

The Sarasota Police Department said nothing was taken, but what happened to this homeowner and his wife has left officers concerned it could happen again.

"We don’t know if they’re in the area or if they’ve traveled to different areas, that’s why we want to get the word out if you are a homeowner or you see something weird it goes back to the old adage if you see something say something," said Judge.

Anyone who gets a knock at the door from someone they aren't expecting, officers said it's best to not answer.

"Don't let them in. We are investigating this to the fullest and we just don’t want to see this happen again," said Judge.

Police said anyone expecting a worker to come into their home should do the following to protect themselves:

Anyone with information on this case is asked to call Sergeant Charlie Riffe at 941-263-6089 or leave an anonymous tip with Crime Stoppers by calling 941-366-TIPS or online at www.sarasotacrimestoppers.com