BARTOW, Fla. - Five Georgia men -- two who remain at-large and one who is now dead -- were at the center of a "brilliant" retail theft ring that targeted 13 states, including stores in Polk County, the sheriff announced Friday.

Sheriff Grady Judd and Florida Attorney General Ashley Moody said the group of suspects would buy new televisions at various Walmarts, remove the new TVs and replaced them with salvaged TVs. Then, they would return them for cash and resell the newer and now-stolen televisions.

Between 2014 and 2020, they were responsible for at least $3.6 million in the retail crime in Florida and other states. This includes about 600 fraudulent transactions that resulted in a loss of about $300,000.

Detectives said of those losses, $174,542.45 was stolen from Walmart stores located in Florida. Four verified thefts occurred within the jurisdictional boundaries of Polk County, Florida on August 31, 2019, which totaled a loss of $3,552.00.

Judd said he didn't want to provide further details on how the crime ring operated to avoid giving ideas to potential thieves.

"It was brilliant," Judd said. 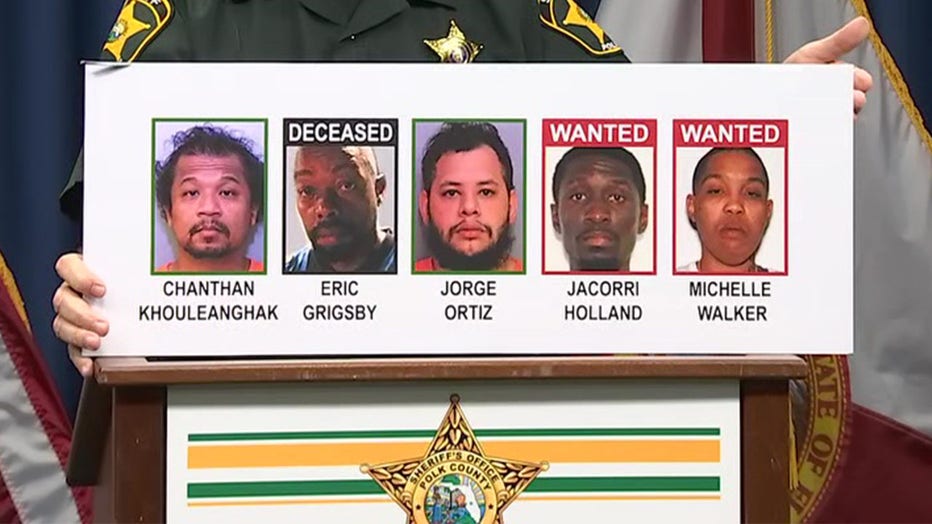 Warrants are out for Holland and Walker, who are known to move between Georgia and Alabama, the sheriff said. Grigsby died of natural causes.

"Now Jesus has got to deal with him and all his thefts," Judd said of deceased suspect.

Moody and Judd said the investigation is still ongoing. They believe there are more suspects out there.

"We will identify them," Judd said.