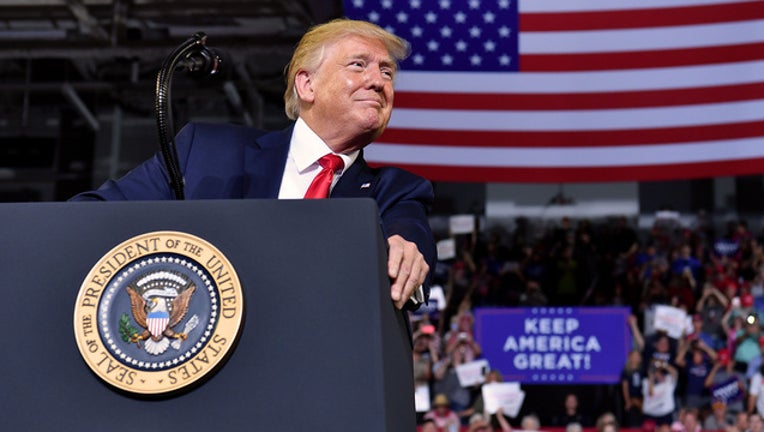 TALLAHASSEE, Fla. (NSF) - Florida Republican leaders were mostly silent Thursday when asked about a “Send her back!” chant at a campaign rally for President Donald Trump. But once the president disavowed the chant, some GOP elected officials spoke out against it.

U.S. Sen. Marco Rubio said the chant, which was targeted Wednesday at Somalia-born Congresswoman Ilhan Omar of Minnesota, was “grotesque,” and that it was “wrong” for Trump to tweet on Sunday that four Democratic congresswomen of color should “go back” to the countries “from which they came from.” Omar was one of the four congresswomen.

But Rubio, a Miami-Dade County Republican, also attacked progressive politicians and the media amid the uproar about the chant.

“The left wing politicians and many in the media demanding outrage are self-righteous,” Rubio tweeted Thursday. “And the ‘outrage and response’ cycle allows for only two sides and demands you to pick a side or else. It’s a stupid game that I refuse to play.”

Florida Senate President Bill Galvano, R-Bradenton, said he was pleased to hear the president disavow the chant Thursday, adding that he does not like the rhetoric and personal attacks.

“It is not constructive in any way and distracts from the real issues,” Galvano said in a statement to The News Service of Florida. He added that the situation has turned into a “dialogue about personalities, rather than policy,” which is what he would rather see.

Trump said Thursday he “was not happy” about the chant, which was shouted by a crowd at a campaign rally in North Carolina. Before Trump made his statement, two GOP members of the Florida House criticized the chant.

“Chanting ‘Send her back’ towards a Congresswoman (or any American) is racist. POTUS when he heard it should have put a stop to it. This election should be about the issues, not trying to further divide our country,” state Rep. Chris Latvala, R-Clearwater, tweeted early Thursday morning.

State Rep. James Grant, R-Tampa, said that even though he disagrees with the beliefs of Omar, chanting “Send her back!” is “not the American answer.” In a “free republic,” he said, the appropriate response is “advocating against her dangerous beliefs and beating her at the ballot box.”

“The love of and belief in America has nothing to do with where someone was born, what ethnicity they are, or any other demographic; it has only to do with a belief in and commitment to freedom,” Grant told the News Service. “Anything less is an affront to freedom and a betrayal of this nation’s core.”

Also criticizing the chant before the president disavowed it was Miami-Dade County Mayor Carlos Gimenez, a Republican.

In a Facebook message, Gimenez said he was “particularly disturbed” by campaign rally chants. He added that “any president from any political persuasion should not tolerate that type of behavior.”

“We should be able to discuss ideas and disagree on them. Whether a U.S. citizen was born in this country or came here (as I did as a child or arrived as an adult) and became a U.S. citizen by choice is immaterial,” Gimenez said.

Gov. Ron DeSantis, whose successful campaign last year was bolstered by the endorsement of Trump, did not comment on the president’s Sunday tweet and the subsequent chant.

“Governor DeSantis is focused on the issues that the voters of Florida entrusted him to oversee and the priorities related to the governance of Florida,” Helen Aguirre Ferre, a spokeswoman for the governor said when asked for comment.

Sen. Joe Gruters, a Sarasota Republican who doubles as the chairman of the Republican Party of Florida, did not respond to requests for comment.

The silence from the governor and Gruters, who remains a staunch ally of the president, irked some Democrats.

“The president endorsed him (DeSantis), helped him win his primary, campaigned with him, kicked off an event in Orlando that he was part of. And literally has nothing to say,” Rep. Anna Eskamani, D-Orlando, said in a text message.

“Every Floridian regardless of political party, but especially Republican elected leaders, have a moral responsibility to speak out against the president’s dangerous, un-American and racist attacks,” Smith said in a text message.

Terrie Rizzo, chairwoman of the Florida Democratic Party, said Republicans have an “obligation to call this kind of hate out when they see it.”

“By not speaking out about these comments, you are telling every Florida immigrant they are not welcome here,” Rizzo said in a prepared statement Thursday.

On Tuesday, Florida members of the U.S. House were forced to take a stance on the president’s Sunday tweet, which has been widely denounced as racist. In a measure passed mostly along party lines, the House voted to condemn Trump’s comment as racist. Florida Democratic representatives voted in favor of the resolution, while Florida Republicans voted against it.