ST. PETERSBURG, Fla. - While providing updates on recent developments in St. Petersburg, city officials condemned the actions of some groups of protesters within the last week, adding that they are searching for three subjects seen in viral videos where weapons were seen.

“If you intend to peaceful protest or counter-protest, have at it, but keep your guns and knives or any other weapon at home. You're not advancing your cause,” said Mayor Rick Kriseman.

Ahead of planned rallies in downtown this weekend, the mayor said there’s a zero-tolerance policy for violence or destruction of property.

“I have not, nor will I ever, give our police department an order to stand down, to not arrest someone who has broken the law,” Kriseman said.

The city is encouraging citizens and businesses to press charges should they be victimized.

“What we're telling people, if you're here peacefully protesting and you see someone breaking the law, report it. If you’re a business owner and they come onto property, call us. We'll trespass them if you give us authority to remove them from the property,” said Police Chief Anthony Holloway.

There were more tense moments over the weekend as a man pulled out a gun on protesters, in St. Pete. It was captured on Facebook Live during a clash between them and counter-protesters

"Right now, we are looking for two subjects that pulled a knife, and we're trying to identify the subject who pulled a gun. We want all three identified," Holloway said. "We don't want that in our city and we're not going to tolerate that behavior in the city."

He said detectives are still gathering information, and want to hear from all sides, as well as talk to witnesses. Their report will be presented to the state attorney.

In addition, Holloway said he was aware of a possible "MAGA" protest scheduled this weekend.

A group of protesters in St. Pete were seen surrounding a vehicle in the downtown area following a grand jury decision in the Breonna Taylor case. The video, captured by the Tampa Bay Times, shows one protester walking on the car, and another throwing a skateboard at it before the driver sped away. Warning: Explicit language can be heard in the video.

Mayor Rick Kriseman described the city as "progressive" and doesn't want people coming from out of town to cause issues in St. Pete.

"Those coming from out of town to cause trouble here, whether on the left or right, are not welcome here," he said. "If you intend to peacefully protest or counter protest, have at it, but keep your guns and knives or any other weapon at home."

Kriseman also commented on the incidents that occurred following the grand jury announcement in Breonna Taylor's case. That night, two intense confrontations occurred and was captured on video by the Tampa Bay Times.

In video captured by the Tampa Bay Times, reaction over the Breonna Taylor case got heated in St. Pete as protesters marched along Beach Drive, and, at one point, confronted a couple who was seated outside a restaurant. Warning: Explicit language can be heard in the video.

One of those videos shows a couple having dinner while protesters yell at them. In another, protesters block traffic and then jump on a person’s car.  In both cases, no one pressed charges.

The mayor acknowledged that he is grateful the city hasn't seen the riots experienced in other parts of the country.

"Violence will not be allowed in our city. Period," he said. "We’ve made it this far, and we’re not going to go backward." 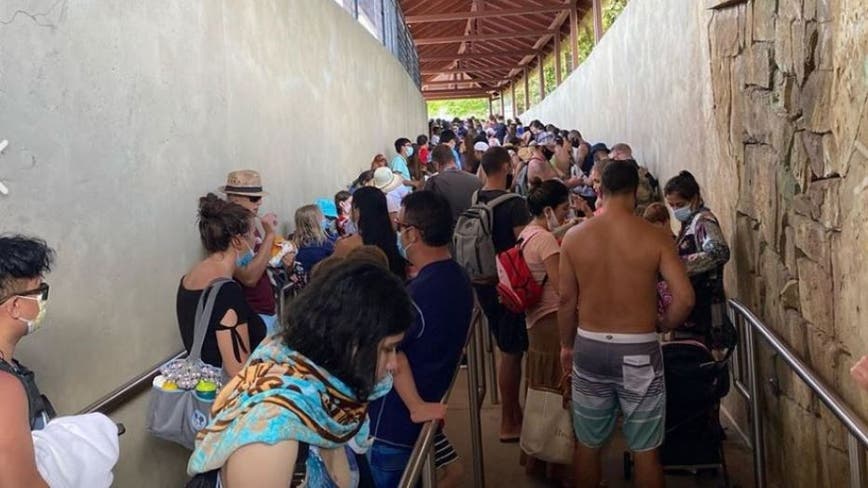