TAMPA, Fla. - Senator Janet Cruz is attempting to alleviate the biggest headache Floridians are facing while applying for unemployment: access.

The back porch of her campaign headquarters in Tampa has been converted into a one-stop-shop for anyone needing a paper unemployment application. The forms are available in both English and Spanish. Applicants can use the secure drop-box on the porch to have the applications sent via priority mail to Tallahassee.

Cruz said she’s covering the cost of shipping and will email tracking receipts to applicants daily. Paper applications are also available at about 100 FedEX locations across the state.

“I think that everyone keeps thinking they're going to fix this website and it is going to be okay,” Cruz said. “Don’t wait for the technology, get the paper and send it in,” she encouraged.

RELATED: How to print out a Florida unemployment application

The low-tech fix is a much-needed workaround as applicants continue to report issues with the state’s website and call lines.

“I applied for unemployment three weeks ago and in that period I’ve made about 174 attempts to call and contact unemployment because the application was filed online but then it said you have to call to complete it,” said Robert Ducos as he stopped by Cruz’ office to pick up a paper application. “174 attempts to call and no response, hang-ups ... I can’t get through so this is my last resort right here.”

Florida Gov. Ron DeSantis said Monday that new servers and new staff were on the way for the state's overwhelmed unemployment application system.

With libraries closed throughout the state and businesses shuttered due to stay-at-home orders, many don’t have access to printers so local leaders are trying to create solutions.

Throngs of people waited in tightly packed lines in parts of Miami on Tuesday as people queued up for printed applications.

Career source locations and about 100 FedEx Office stores across the state will also offer the printed applications.

Meanwhile, Governor Ron DeSantis said they’ve added 72 new servers to address the issues with the unemployment site. According to him, the site can now handle up to 120,000 connections at one time. Hundreds of phone operators are also being trained to staff the overwhelmed call center.

Still, numerous applicants say they haven’t been able to get through. Cruz says they should just apply the old-fashioned way by filling out the paper application and letting the postal service get it to Tallahassee. 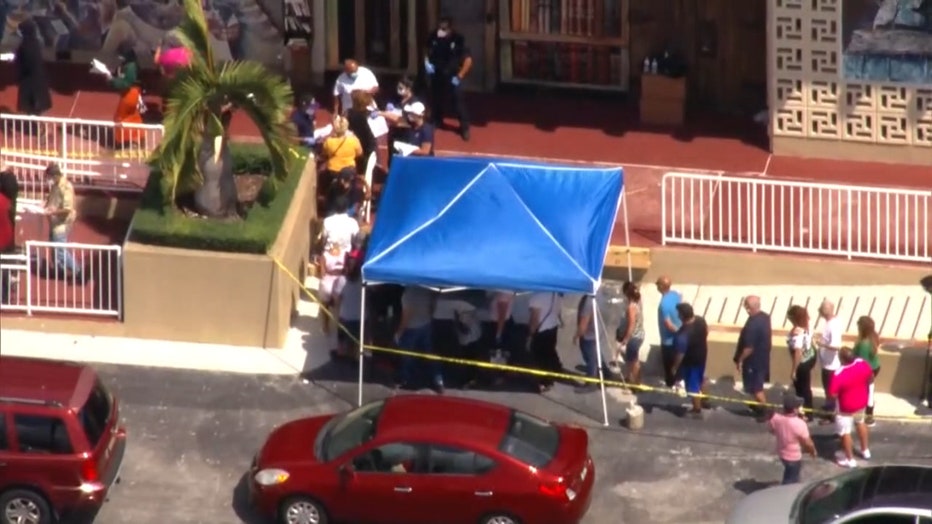 Long lines were seen in Hialeah, Florida on April 7, 2020 as residents waited for a paper application to file for unemployment. (WSVN)

“I think everyone keeps thinking that they’re going to fix this and it’s going to be OK but it’s not going to be OK,” said Cruz. “Days are going by. The longer you wait, it’s my understanding that you won’t get retroactive pay. I’m encouraging people to do the paper app and stop waiting for the site to get better.”

Cruz, along with Representatives Charlie Christ and Kathy Castor, said the benefits need to apply retroactively. The way the current system is set up, applicants only receive full state and federal benefits from the date they’re entered in the system, not from when they actually lost their job. Without a guarantee of retroactive pay, the delays are literally costing people.

The trio are also asking that all Floridians be able to qualify for the emergency unemployment benefits. Under the normal system, several types of workers, contract or gig workers, can’t file for unemployment.

Senator Cruz’s office is located at 210 A South MacDill Avenue in Tampa. Parking is in the rear of the building, just off the porch.