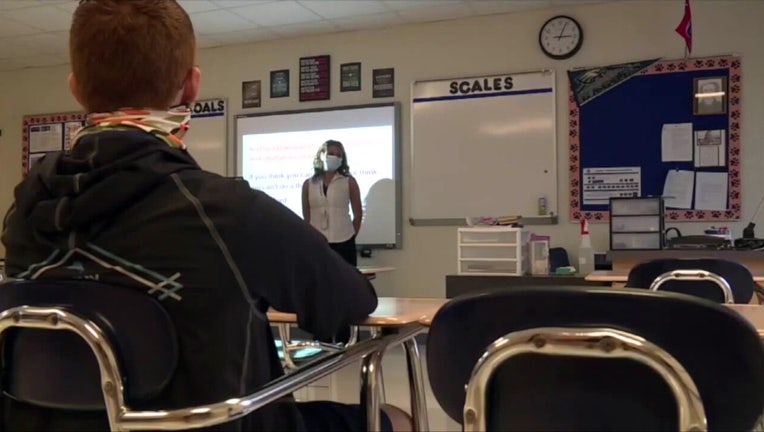 TALLAHASSEE, Fla. - Trying to end months of legal wrangling, the state is urging an appeals court to keep in place a decision that backed Gov. Ron DeSantis and Education Commissioner Richard Corcoran in a fight about reopening schools during the COVID-19 pandemic.

Attorneys for DeSantis and Corcoran filed documents late Tuesday asking the 1st District Court of Appeal to deny requests by the Florida Education Association teachers union and other plaintiffs for a rehearing in the high-profile case.

The plaintiffs last month sought a rehearing after a three-judge panel of the appeals court overturned a circuit judge’s ruling that said Corcoran violated the Florida Constitution when he issued a July order aimed at reopening schools. The plaintiffs filed two similar motions asking for a rehearing by the three-judge panel or by the full appeals court, a request known as seeking an “en banc” hearing.

But in the documents filed Tuesday, attorneys for DeSantis and Corcoran contended that the plaintiffs had not offered grounds to justify a rehearing in the case. The plaintiffs have contended that Corcoran’s July order violated a constitutional guarantee of “safe” and “secure” public education.

Students warned to be COVID-conscious during Thanksgiving break

As students prepare to head home for Thanksgiving, universities are taking steps to keep young people from spreading COVID-19. Some schools are requiring mandatory exit tests while others are having students finish out the year online.

Leon County Circuit Judge Charles Dodson agreed with the plaintiffs and issued a temporary injunction in August. But the panel of the appeals court on Oct. 9 flatly rejected Dodson’s ruling, saying that nothing in Corcoran’s order “requires any teacher or any student to return to the classroom.” The panel said Corcoran’s order gave school districts discretion about how to handle the situation.

In one of the documents Tuesday asking for denial of a rehearing by the full appeals court, the state’s attorneys wrote that the three-judge panel “issued a thorough and detailed opinion that correctly rejected the plaintiffs’ arguments in defense of the trial court’s erroneous preliminary injunction.”

The Hillsborough County School District recorded a record high number of daily COVID-19 cases earlier this week, as leaders for the school system urged parents to continue following CDC guidelines when students are off campus.

Corcoran issued the order as he and DeSantis pushed for schools to reopen after being shuttered in March because of the pandemic. Students in the spring were shifted to online learning, but Corcoran and DeSantis argued that students and families should have a choice of in-person or online learning during the 2020-2021 school year.

A key issue in the legal fight has involved part of the order that dealt with the way public schools are funded. The order effectively conditioned a portion of money on school districts submitting reopening plans that included the use of brick-and-mortar classrooms, in addition to offering online alternatives.

In his Aug. 24 ruling that granted a temporary injunction, Dodson said the order left school districts with “no meaningful alternative” about reopening classrooms.

But the panel of the Tallahassee-based appeals court overturned Dodson’s ruling on a series of grounds. It said, in part, the plaintiffs lacked legal standing and were asking courts to decide “non-justiciable political questions.” Also the panel said the plaintiffs’ arguments would require courts to violate the constitutional separation of powers.

For hours, dozens of parents spoke at Tuesday’s Pinellas County School Board meeting. Many are still upset their kids are required to wear face masks inside classrooms.

In requesting a rehearing, however, attorneys for the plaintiffs said the panel had accepted “all of the state’s arguments --- despite the trial court’s factual findings, supported by clear evidence, establishing that the state had abused its powers in a way that was harmful to Floridians.”

“Even though in-person school opened in almost all Florida counties by August 31, the irreparable harm is continuing because teachers and staff who were forced to report to schools are becoming infected with COVID-19, have become sick, and even died after returning to in-person school,” said the motion for a rehearing before the full court.