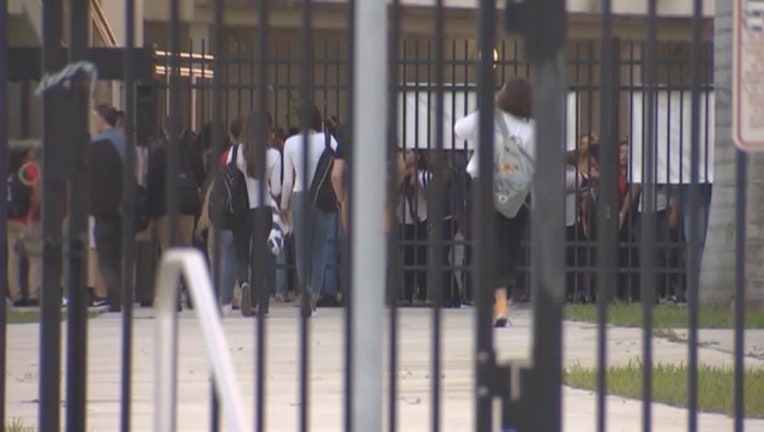 TALLAHASSEE, Fla. (NSF) - A state school-safety commission meeting got heated Wednesday as members tackled a range of issues stemming from a controversial school "guardian" program, while one panelist recommended allowing Florida pre-schools to have armed security.

Two months after the state reported nearly 200 schools did not have an armed resource officer as required by state law, members of the Marjory Stoneman Douglas High School Public Safety Commission were frustrated to learn that more than two dozen Broward County charter schools lacked a long-term plan for the security guards.

And school officials in Palm Beach County who hired a private contractor to train school guardians for charter schools also drew the ire of the commission.

Pinellas Sheriff Bob Gualtieri, the chairman of the committee, said district officials were taking advantage of an "ambiguity" in state law to outsource the training. Gualtieri, who is also a lawyer, said the outsourcing was contrary to the commission's intent to have sheriffs be responsible for the training.

"The last thing we need in the state of Florida is for these companies to start popping up and start doing these trainings, and then it becomes privatized training," Gualtieri said during Wednesday's commission meeting in Sunrise. "This is not a good thing, and it's not a good place to be."

But while concerns about non-compliance with state-mandated school safety-officer requirements dominated Wednesday's meeting, state Sen. Lauren Book said some people are concerned about a lack of armed security at pre-schools.

Book, a Plantation Democrat who serves on the commission, told The News Service of Florida on Wednesday that she is currently working with Florida Department of Children and Families staff to "figure out the solution" to what she says is an issue at child-care facilities.

"Right now, you will lose your license if you have an armed guardian," Book said in a text message.

Book said the commission is expected to continue discussing her proposal with the state's child welfare agency.

But Gualtieri appeared to be taken off-guard when Book brought up the topic. Upon hearing her suggestion, he asked whether it could be considered an expansion of the guardian program.

"I would not say an expansion of the guardian program, but a licensing change," she answered.

Book's staff told the News Service the senator was proposing to allow day-care facilities to have armed security to protect 2-year-olds and 3-year-olds in their care. Book's plan would tweak the state law that governs voluntary pre-kindergarten education program, and would require action by the Legislature.

Recommendations made by the commission have had a lot of sway with Gov. Ron DeSantis and the Florida Legislature. The panel was created in the aftermath of the massacre at the Parkland high school on Feb. 14, 2018, which left 17 students and faculty dead, and 17 others injured.

One of the policy proposals recommended by the panel which made it into state law is an expansion of the "guardian" program, which allows school personnel to be trained and armed in schools. Based on the commission's recommendation, the Legislature expanded the program to allow fulltime classroom teachers to participate.

Safe areas in classrooms and a statewide standardized procedure for evaluating students who may pose a threat to others are also included in state laws passed this spring, following the release of the panel's recommendations.

"I think you can see that legislatively a lot has been done," Gualtieri said.

But the commissioners want some shortcomings in school-safety laws to be addressed when lawmakers return to Tallahassee in January for the 2020 legislative session.

"[Lawmakers] have to clean this up and remove this ambiguity," Gualtieri said.

Polk Sheriff Grady Judd also suggested that a grand jury, created by the Florida Supreme Court to investigate the mass shooting, look into the "funding, procurement and the law" regarding the outsourcing of the training.

"I believe that a few subpoenas and an appearance before the grand jury would be appropriate," Judd, who serves on the commission said.

As the commission looks to address the issue in the future, bringing Broward County charter schools into compliance appeared to be a more pressing matter.

With 29 of the county's 89 charter schools without a long-term plan to have an armed security guard at every school, Gualtieri called on the boards overseeing the schools to "pull the charters."

Broward Sheriff Gregory Tony said that his deputies and municipal police officers are temporarily covering 13 charter schools that did not have armed guards in place in time for the start of the new school year this week.

Tony, who was appointed in January by DeSantis, pleaded with officials to hold non-compliant charter schools accountable.

Tony said some of the 13 schools may no longer be in compliance after Friday, when he plans to start removing the officers temporarily assigned to the schools.

"We will be knocking on doors with every single one of these charters and we will be giving them a deadline," he told the commission.

A statewide survey conducted by the Florida Department of Education showed that more school districts have opted into the school guardian program since June.

As of this week, 44 of the state's 67 school districts have implemented the guardian program, with a total of 1,062 guardians statewide. In comparison, there are 3,156 law enforcement officers assigned to the 3,717 public schools in Florida, according to the survey.

Broward County Superintendent of Schools Robert Runcie is scheduled to appear before the commission Thursday morning, when the panel intends to grill him about the out-of-compliance charter schools. Some members of the commission want to publicly identify the schools that have not met the safety-officer mandate.

"We want those names, so we can call them out to the parents, so they'll know which schools are not complying with the law," Judd said.