The race to restore power

About 43,000 men and women have been working around the clock to restore power to Floridians. So far, electricity has returned to 2 million people who lost during Hurricane Ian.

But with the work expected to cost billions of dollars over the next decade, commissioners expressed concerns about effects on utility customers’ pocketbooks. Monthly electric bills have climbed during the past year because of issues such as high prices of natural gas used to fuel power plants.

Also, customers in the coming months could get hit with additional costs related to restoring power after Ian.

As the commission Tuesday took up what are known as "storm protection plans," Commissioner Gary Clark described the situation as a "balance." 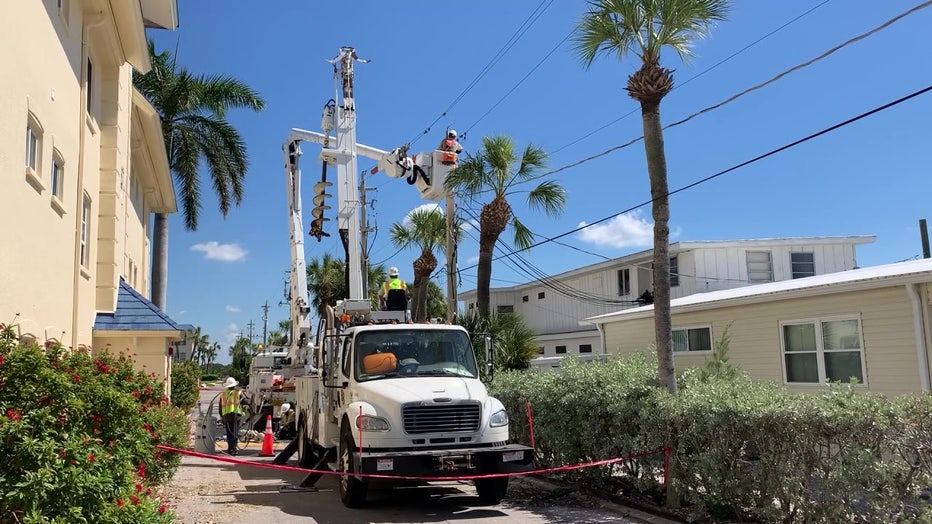 Crews are continuing to work on restoring power after Hurricane Ian slammed the Southwest Florida coast and continued across the state.

"We are never going to build a system that is storm-proof. It’s not possible," Clark said.

Commissioner Gabriella Passidomo also raised concerns about costs and benefits, saying that "maybe we need to just temper our pace a little bit in these investments and reassess over time about how effective they are in certain areas. Because, as we have seen, every storm is very different."

Utilities filed the proposals in the spring, but Tuesday’s commission votes came as crews continued to work on restoring power after Hurricane Ian slammed the Southwest Florida coast Wednesday and continued across the state.

FPL, which provides electricity in many of the hardest-hit areas, said that as of 10 a.m. Tuesday, it had restored power to 1.9 million of 2.1 million customers affected by Ian.

"FPL has essentially completed restoration in all regions of the state except Southwest Florida, where Ian made landfall as a high-end Category 4 hurricane and downed trees and flooding continue to pose a challenge to crews working to restore service," the utility said in a news release.

Meanwhile, Tampa Electric said Tuesday it had largely finished restoring power, though some customers are not able to receive electricity because of issues such as flooding or damage to homes’ electrical equipment. Also, Duke said Monday it was finishing restoration.

The City of North port said water is receding, but in certain areas, including the estates it remains high.

The plans approved Tuesday were tied to a 2019 state law that passed after Hurricane Irma, Hurricane Michael and other storms caused widespread power outages. The Legislature almost unanimously passed the measure, which, in part, changed the way storm-protection projects were financed.

Previously, utilities incorporated such costs in their base electric rates, which are set for multiple years. But the law set up a separate Public Service Commission process that allowed utilities each year to seek to collect money from customers for the projects.

Utilities file 10-year storm-protection plans with the commission and then are able to seek money from customers annually to carry out the plans.

After the commission made some changes Tuesday, utilities will have until Oct. 25 to file revised plans. The commission is scheduled to hold a hearing Oct. 25 to Oct. 28 to determine the costs that will be passed along to consumers next year for the projects.

READ: Those with damaged homes, businesses left figuring out how to rebuild, overcome risks after Hurricane Ian

As an example of the money involved, FPL’s proposal included more than $4.67 billion in costs over the next three years, according to a commission staff recommendation. That was before Tuesday’s changes, which would at least slightly reduce the amount.

In its proposal, FPL said the projects would largely continue efforts started under a plan approved in 2020 by the commission.

"The existing hardening and storm preparedness programs have already demonstrated that they have and will continue to increase T&D (transmission and distribution) infrastructure resiliency, reduce restoration times, and reduce restoration costs when FPL’s system is impacted by extreme weather events," the proposal, filed in April, said.