Tourists flee cold as TECO crews prepare to head out

TAMPA, Fla. - Though some flights were delayed and others cancelled altogether, travelers arriving in Tampa from the north Tuesday morning were more than happy to swap their ski jackets for sunglasses.

"It was just so nice when we were getting ready to land and he said it was 70-some degrees in Tampa," said traveler Dolly McAllister, who was arriving from Pittsburgh. "That was enough for me right there."

A blast of wintry weather has dumped snow and ice across the nation’s midsection, and left millions in Texas without power.

Chris Heisler is one of them. The Tampa resident arrived in Texas this weekend to honor a fallen Dallas police officer – he never thought he’d be stuck due to snow.

"Everything is kind of scrambling here," he said. "There’s no power. The hotel doesn’t have power. It hasn’t had power for the last 24 hours. Now there’s no water." 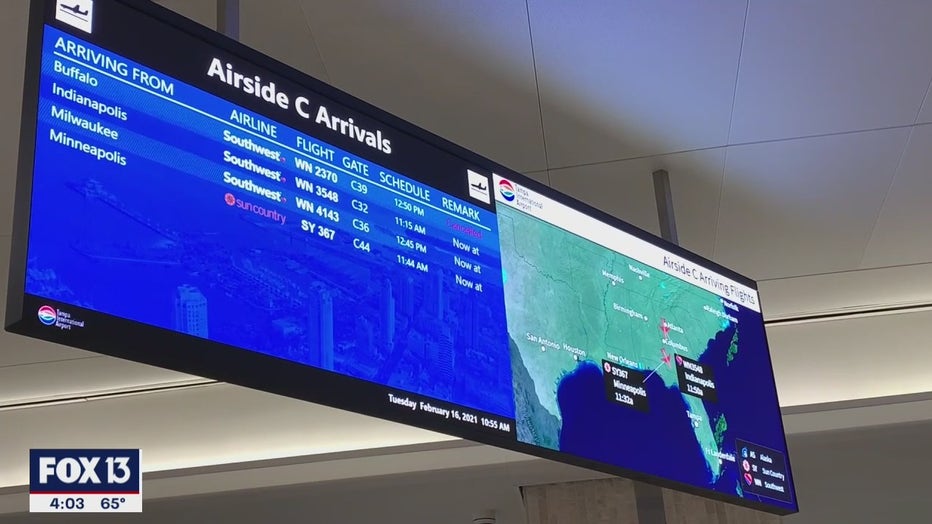 FULL COVERAGE: Record-setting winter storm charges across the US, with 2nd storm on the way

Heisler, who grew up in Anchorage, Alaska, says it’s starting to look a lot like home.

And the generator his hotel does have, is powering the elevators.

"It got down to 45 degrees in my hotel room, so it’s been cold," he said. "I’ve been sleeping with my jacket and my jeans on, just doing what I can to stay warm."

TECO crews will face a different kind of response this time around as they prepare to deal with winter storms instead of tropical storms.

"If they have no source of heat and you’re sitting below zero, that’s bad for anybody," said TECO lineman John Farkas. "They need restoration as fast as they can, so they can get back to at least warm. That’s our goal."

And if anyone knows cold, it’s those escaping 8-degree temperatures.

"Oh, it’s been cold, and snowy and icy – you can’t go outside without a coat," said traveler Joan Angert, who arrived in Florida from Pittsburgh. "It’s be great to be down here where it’s warm."