Antonio Brown hasn't been arrested yet

Tampa police issued the arrest warrant for Antonio Brown, a former Buccaneer, on a domestic violence charge. When officers tried to serve it at his home, they said he didn't exit the home.

TAMPA, Fla. - Days after an arrest warrant was issued for Antonio Brown, police said there is still no update in the search for the former Buccaneer.

"There are no updates at this time. As soon as something new is available for release, we will put it out via press release. Thanks for understanding," a Tampa police spokesperson wrote to FOX 13 on Monday morning.

Thursday, police issued the warrant on a charge of domestic battery. It stems from an argument with his ex-fiancée turned physical at his South Tampa home after he threw a shoe at her, investigators said. That afternoon, police tried to serve the arrest warrant at the house but no one opened the front door and officers left. A legal expert explained it's not uncommon for police to leave after trying to issue a warrant if they don't want to escalate things, can't physically see him in the home, or are negotiating a surrender behind the scenes.

The domestic incident occurred Nov. 28, when police were called to the home, where Brown's ex-fiancée resides with the couple's four children and one of Brown's unrelated teenage sons.

"The suspect exited the residence and threw a shoe at the victim striking her in the ponytail," the police report stated. "The victim had no injuries but believed the shoe was meant for her head. The suspect would not open the door or come outside to speak with officers. The suspect also during this incident attempted to issue an informal eviction to the victim."

The narrative written by an officer went on to say that the victim's belongings were thrown out into the street, but by the time law enforcement arrived, she had gathered them all and put them in the driveway. The victim also noted that Brown has two guns inside the house. 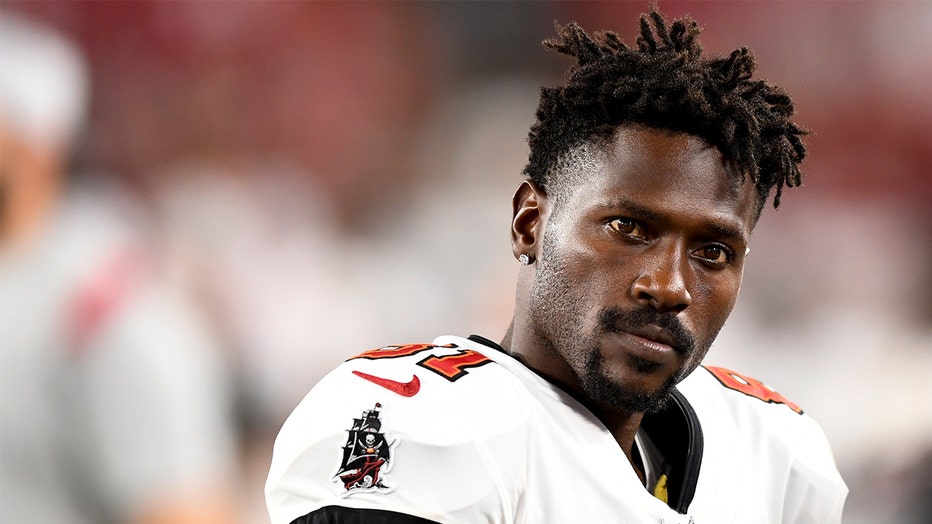 TAMPA, FLORIDA - AUGUST 14: Antonio Brown #81 of the Tampa Bay Buccaneers looks on during the fourth quarter against the Cincinnati Bengals during a preseason game at Raymond James Stadium on August 14, 2021 in Tampa, Florida. (Photo by Douglas P. De

During the ordeal, police said Brown locked himself in the house while officers tried to speak to him. Investigators said Brown threatened to shoot her if she tried to enter the house.

"The suspect placed an informal eviction notice on the door … with 11/28/2022 at the date showing the victim has 7 days to gather her belongings and leave," the police report said in part. "The suspect continued throughout the incident to state that the victim had no right to be at that residence or to even gain entry to it because she did not live there. The victim's ID has the listed address as her residence as of 10/18/2022."

The officers said after "many failed attempts" to convince Brown to allow her to gather her belongings, they advised the victim to spend the night elsewhere. According to police, the children were told they could go back inside the house, but they were afraid to.

The next day, Tampa police filed a risk protection order against Brown, which can be issued if a person poses a significant risk to themselves or others and has access to a gun. A judge denied the request. 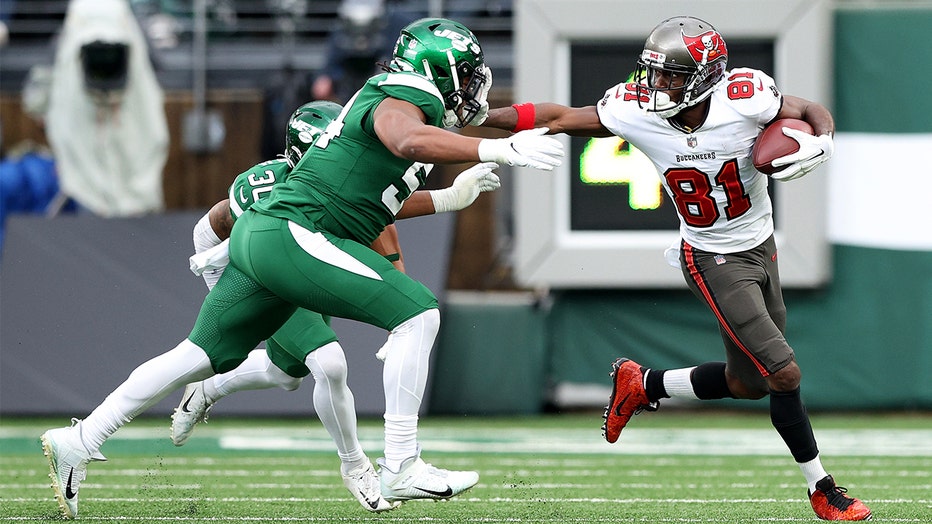 Antonio Brown carries the ball against Ronald Blair #54 of the New York Jets in the third quarter of the game at MetLife Stadium on January 02, 2022 in East Rutherford, New Jersey. (Photo by Elsa/Getty Images)

Earlier this year, Brown, a free agent, was kicked off the Buccaneers team after leaving the field shirtless as Tampa Bay faced the New York Jets. The Bucs won 28-24.

PREVIOUS: Arians says Antonio Brown 'no longer a Buc' after dramatic exit during game against Jets

After the game, then-coach Bruce Arians said Brown was no longer with the team.