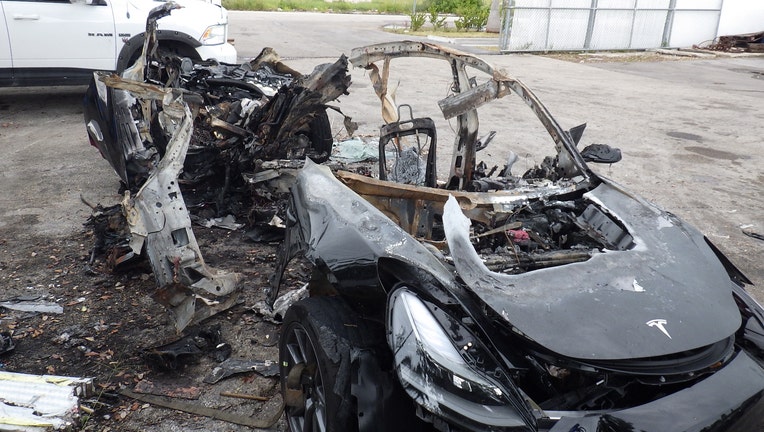 Provided by the National Transportation Safety Board

FORT LAUDERDALE, Fla. - The Tesla driver who died with a passenger in a fiery September crash near Miami accelerated to 90 mph (145 kph) in the seconds before he lost control and smashed into trees, federal investigators said Wednesday — a conclusion disputed by the attorney representing the driver’s family.

The National Transportation Safety Board said in a preliminary report that the 20-year-old driver accelerated his 2021 Model 3 sedan as he crossed a Coral Gables intersection to beat a yellow light on a residential street, his speed tripling the 30 mph (49 kph) limit.

The driver lost control as he cleared the intersection and veered left onto the median, where the Tesla glanced off one large tree before smashing its passenger’s side door into a second, the NTSB said. He never hit the brake, the report said, citing five seconds of data recovered from the car’s severely damaged event recorder.

The Sept. 13 crash damaged the Tesla’s high-voltage lithium-ion battery and the car erupted into flames, killing the driver and his 19-year-old female passenger.

Aaron Davis, the attorney representing the driver’s family, said a video taken from behind the Tesla does not appear to show it accelerating at an excessive speed. He said the video shows the car bottoming out, turning in a manner that can’t be attributed to the driver and losing a tire before striking the trees and exploding. He declined to release the video, but said it has been shared with the NTSB.

He said even if the driver was going 90 mph (145 kph), the car should not have lost control or erupted in a fireball like it did, putting the blame for the deaths on Tesla, which advertises its cars’ acceleration. He expects a lawsuit will be filed.

"You cannot market a car for its speed and its coolness and then blame the driver for doing the thing you are marketing," Davis said.

Police have not released the victims’ names and Davis declined but said both were local college students. He said the driver "did not have a significant history" of speeding or traffic violations and that the Tesla was his "dream car."

Tesla did not respond to an email request Wednesday seeking comment.

The company recalled nearly 2,800 Model 3s last month, including some from the 2021 model year, because of problems with the cars’ suspension that could lead to the driver losing control and crashing. The NTSB report does not say if the crash vehicle was covered by the recall.

Davis said the company has not released the vehicle identification numbers, so he does not know yet if the car in this crash was covered. But he said because the car bottomed out and struck the road before the crash, he suspects the suspension was faulty.

The NTSB said at the time of the crash it always investigates any involving new technology like Teslas, and that it would focus on the operation of the vehicle and the fire.

Tesla vehicles do not use gasoline that could raise the risk of a big fire after a crash, but the company’s guidance to first responders includes a warning about lithium-ion battery fires. Tesla representatives have said high-speed collisions can result in a fire for any kind of car.

The NTSB will issue a full report and will determine the cause of the crash at a later date. The agency has broad authority to investigate transportation crashes, but it has no regulatory powers. In traffic crashes, it can only make recommendations to the National Highway Traffic Safety Administration and other regulatory agencies.

Coral Gables police said Wednesday their own investigation remains open and no report has been issued. The city is located southwest of downtown Miami.