Someone planted a banana palm tree in a pothole, right in the middle of a street in Fort Myers, to protest the poor conditions of the road. But because the street is private, Lee County officials say it is up to the private owner to fix the problem.

FORT MYERS, Fla. - It might look like a typical banana tree -- but it's not growing in a typical place.

Someone planted the tree in a pothole in the middle of a Fort Myers street to make a point: the pothole is so deep, you can plant a tree in it.

"I pulled up, and I’m like, ‘Is that really a tree in the middle of the road?'" resident John Hulker told WINK-TV.

"Me and my wife started instantly laughing," Nicholas Angus, who lives in the area, recalled to the news outlet.

But the tree is no laughing matter, and neither is the pothole where it's growing. 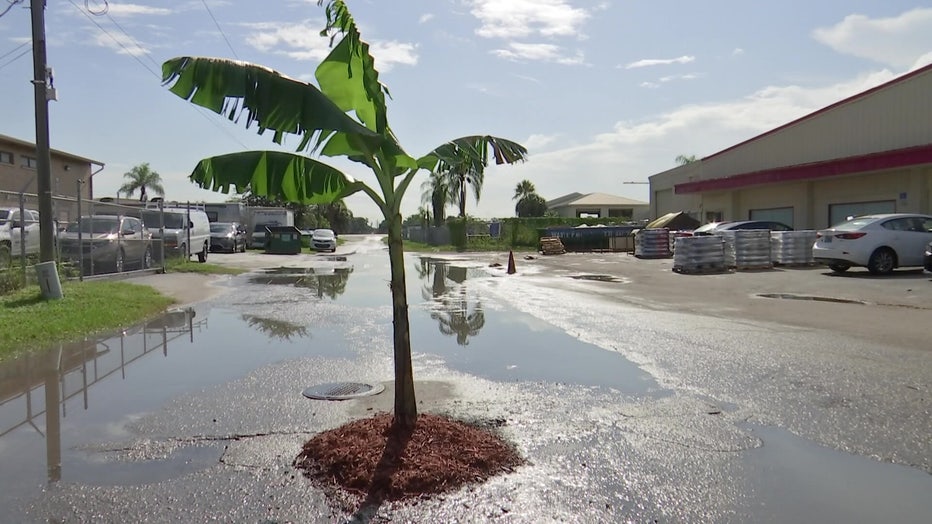 Cars traveling on Honda Drive have to either veer left or right to get around the tree -- just like they had to do if they saw the pothole in time.

"The tree is actually kind of making it harder to get around the next pothole that’s right next to it because I usually just drive over the pothole, but now that there’s a big tree, you can’t drive through a big tree," Angus said.

RELATED: Cow gets stuck in tree in Louisiana after Hurricane Ida flooding

Local business owner Scott Shine says he's seen drivers destroy their tires due to the potholes on the street.

"I see a lot of cars come through here, and they bottom out," Shine said. "You know, you hear this big bang, and somebody hit a hole."

But Lee County officials tell WINK they are not responsible for fixing the pothole because Honda Drive is a private street. Officials said it's up to the private owner or owners to fix the problem.