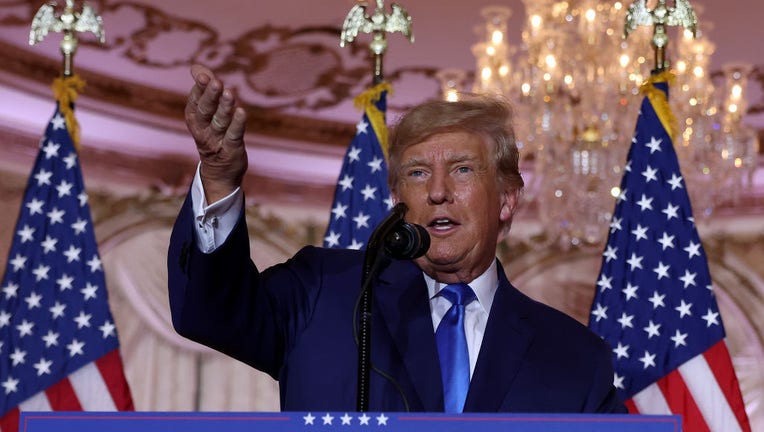 WASHINGTON - It was supposed to be a red wave that former President Donald Trump could triumphantly ride to the Republican nomination as he prepares to launch another White House run.

Instead, Tuesday night’s disappointing results for the GOP are raising new questions about Trump's appeal and the future of a party that has fully embraced him, seemingly at its peril, while at the same time giving new momentum to his most potent potential rival.

Indeed, some allies were calling on Trump to delay his planned announcement next week, saying the party's full focus needs to be on Georgia, where Trump-backed football great Herschel Walker's effort to unseat Democratic Sen. Raphael Warnock is headed to a runoff that could determine control of the Senate once again.

"I’ll be advising him that he move his announcement until after the Georgia runoff," said former Trump adviser Jason Miller, who spent the night with the former president at his Mar-a-Lago club in Florida. "Georgia needs to be the focus of every Republican in the country right now," he said.

Trump sought to use the midterms as an opportunity to prove his enduring political influence after losing the White House in 2020. He endorsed more than 330 candidates in races up and down the ballot, often elevating inexperienced and deeply flawed candidates. He reveled in their primary victories. But many of their positions, including echoing Trump's lies about a stolen 2020 election and embracing hardline views on abortion, were out of step with the political mainstream.

Trump did notch some big wins Tuesday, particularly in Ohio, where his pick for the Senate, "Hillbilly Elegy" author JD Vance, sailed to easy victory after Trump's endorsement catapulted him to the front of a crowded primary pack. In North Carolina, Rep. Ted Budd, an early Trump pick, kept an open Senate seat in GOP hands.

JD Vance has defeated Democratic U.S. Rep. Tim Ryan for an open U.S. Senate seat in Ohio. The 38-year-old Vance, a newcomer to politics, benefited from a last-minute push by former Republican President Donald Trump, who had endorsed him.

But Trump lost some of the night's biggest prizes, particularly in Pennsylvania, where Dr. Mehmet Oz, who only narrowly won his Senate primary with Trump's backing, lost to Democrat John Fetterman. Trump-backed candidates also lost governors' races in Pennsylvania, Michigan and Maryland, and a Senate race in New Hampshire, though Trump seemed to celebrate the latter, bashing Republican Dan Bolduc for trying to moderate his stances by backing off his embrace of Trump's election lies.

"Had he stayed strong and true, he would have won, easily," Trump said on his social media network. "Lessons Learned!!!" (Trump also cheered the loss of Colorado Republican Senate hopeful Joe O’Dea, who had said he thought it was time for the party to move on from Trump.)

Other high-stakes races in Arizona and Nevada remained too early to call.

Indeed, the Republicans' biggest victory of the night came in Florida, where Gov. Ron DeSantis cruised to reelection, cementing his status as a rising national Republican star as he eyes his own potential 2024 run.

"I have only begun to fight," he told supporters in his victory speech.

While Republicans still appear well positioned to flip the House, and could ultimately take the Senate, too, those who had believed frustrations with record inflation, combined with President Joe Biden's low approval ratings, would deliver swift and decisive victories were pointing fingers in the former president's direction. The night's message, they argued: The American people want to move on.

"I mean, we had a historic opportunity and Trump’s recruitment of unelectable candidates blew it for us," said Scott Reed, a veteran Republican strategist. "Trump’s now lost three elections in a row for the Republican Party and it’s time to snap out of this foolishness."

Reed argued the party "had everything going for us: money, the issue agenda, Biden being in the tank," but said Trump's efforts to keep himself in the spotlight by teasing a run in the race's final stretch "obviously worked up a lot of independents and Democrats to turn out and vote."

Former New Jersey Gov. Chris Christie, a longtime Trump friend and adviser-turned-critic, who is considering his own run for president in 2024, said Republicans "have a fundamental decision to make."

"We lost in ‘18. We lost in ‘20. We lost in ’21 in Georgia. And now in ’22 we're going to net lose governorships, we're not going to pick up the number of seats in the House that we thought and we may not win the Senate despite a president who has a 40% job approval," he said. "There’s only one person to blame for that and that’s Donald Trump."

He blamed Trump for elevating deeply flawed candidates, who won their primaries but struggled in the general election.

‘The only animating factor (for him) in determining an endorsement is, ’Do you believe the 2020 election was stolen or don't you?'" Christie said. "It's not, ‘Can you raise money?’ It's not, ‘Do you have an articulatable vision for the future of your state or your district?' It's not evidence of past success in communicating to voters. It is a completely self-centered determination."

Trump, meanwhile, insisted publicly he was happy with the results.

"While in certain ways yesterday’s election was somewhat disappointing, from my personal standpoint it was a very big victory - 219 WINS and 16 Losses in the General - Who has ever done better than that?" he wrote on his Truth Social network Wednesday afternoon.

His spokesman Taylor Budowich also touted Trump's endorsement record, and said, "As President Trump looks to the future, he will continue to champion his America First agenda that won overwhelmingly at the ballot box last night."

But Republican strategist David Urban, a former Trump adviser, said the Trump brand is wounded no matter what the former president says.

"Of course, he’s going to claim victory, right? The president touts an accomplishment record that includes victories in uncontested races. He can say whatever he wants. But how do people feel in America? I think people feel not great about the Trump brand right now," Urban said. "It’s bad."

Some now worry that if Trump goes forward with his planned announcement next week, he could pave the way for a rerun of Republicans' 2021 losses in Georgia by dominating the race.

Former Trump press secretary Kayleigh McEnany, who now works for FOX News, advised on air that Trump should hold off on an announcement until after the Georgia Senate runoff.

"I think he needs to put it on pause," she said. Asked whether Trump should campaign in the state, she said: "I think we’ve got to make strategic calculations. Gov. DeSantis, I think he should be welcomed to the state, given what happened last night. You’ve got to look at the realities on the ground."

The midterm election battle between candidates Herschel Walker and Raphael Warnock for a seat on the U.S. Senate will head to a runoff election on Dec. 6, with the winner having a potentially huge impact on the balance of power in Congress. Georgia Sec. of State Brad Raffensperger announced the runoff election details at a press conference in Atlanta.

Budowich did not respond to questions about such efforts, but Trump seemed to throw cold water on the advice.

"We had tremendous success," he told Fox News Digital Wednesday. "Why would anything change?"

Trump's setbacks, meanwhile, were giving new hope to the long list of potential rivals who have been quietly waiting in the wings and now face the decision of whether to run, too.

That includes DeSantis, who emerged as the night's obvious winner. "DeFUTURE," The New York Post declared. In addition to his wide margin of victory, DeSantis carried Democratic stronghold Miami-Dade, and did so without Trump’s endorsement. (Though Trump did tell reporters he’d voted for the governor days after insulting him as "Ron DeSanctimonious.")

"DeSantis comes out of the election with lot of momentum," said GOP strategist Alex Conant. "Trump has been weak for a long time but it wasn't clear who the alternative was. ... For the first time, Trump really has a formidable rival within the party."

Even some Democrats conceded DeSantis’ strength.

Miami-based Democratic strategist Jose Parra said the Trump rival enters the 2024 conversation with "a bunch of wind in his sails" after stronger-than-expected performance across the state — especially in south Florida’s Miami-Dade County.

Speaking at the White House on Wednesday, Biden said his "intention" is to run again. But noting the emerging competition between Trump and DeSantis, he said it would be "fun watching them take on each other."