Babies rescued from Russia have reunited with their family

A pair of Texas parents has a lot to be thankful for this year after their infant twins were rescued from a Russian orphanage.

Project DYNAMO, a Tampa non-profit that has helped rescue hundreds of American citizens from war-torn regions of Ukraine and Afghanistan, announced the successful union and the organization's first-ever rescue mission inside Russia. 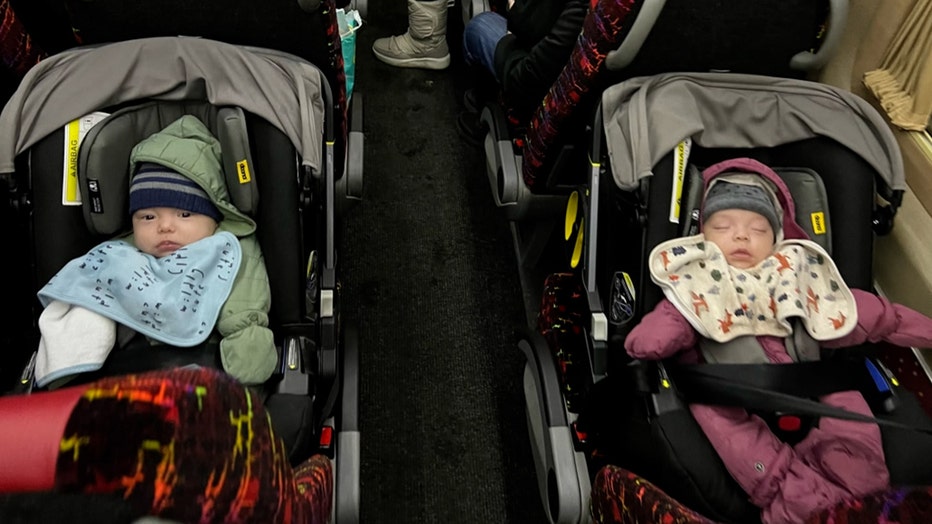 According to the group, they were contacted by an American couple whose twins were sent to a state-run Russian orphanage after their Ukrainian surrogate mother gave birth to the babies in September.

"I don't know how they do it. I'd be crawling out of my skin," Project DYNAMO Founder Bryan Stern said. "I'd be going nuts if my babies were stuck in an orphanage in Russia."

The surrogate lived in Donbass, in eastern Ukraine, which became one of the most heavily afflicted regions when Russia invaded earlier this year. The surrogate mother fled the violence to Crimea, and then eventually ended up in Saint Petersburg, Russia.

A Tampa-based non-profit, Project Dynamo, has been rescuing Americans held by Russia since February. Six months later, their mission continues.

For months, the family has worked tirelessly to get their newborns out of Russian custody safely, but without success. At the orphanage, the babies were at risk of being adopted by a Russian family.

Project DYNAMO says the U.S. State Department and other entities were supportive of the family, but could not safely retrieve the twins, given the current political climate and diplomatic relations with Russia. Unencumbered by the same pressures, however, Stern's rescue group was able to step in.

"This has been a real undertaking," Stern said. "It's been hundreds and hundreds of emails and phone calls of frustration and pain and fear and a whole myriad of emotions."

Within a week of hearing from the parents, Stern said he flew to the Russian border town of Narva, Estonia, and devised a rescue plan. Then, Project DYNAMO says it successfully had the twins out of Russia in a single day. The infant boy and girl were united with their parents last Thursday.

"Once again, the Project DYNAMO team came through when others could not," Stern said in a release. "I’m always proud of my team, but I’m especially proud of them after completing our first mission inside of Russia. Had we not rescued the twins, who knows what their fate and future would be or if their parents would have ever met them. I’d like to express my deep appreciation to United States Embassy Moscow Consular Services, as well as U.S. Embassy Tallinn Consular."

The parents, who've asked to remain anonymous for security reasons, expressed their relief and gratitude in a statement.

After spending the year conducting hundreds of dangerous missions in Afghanistan, Ukraine, and state-side following Hurricane Ian, Stern said he is thankful this holiday season.

Project DYNAMO describes itself as operating in "the gray space" in situations where the United States government doesn’t operate for various diplomatic, strategic, or logistic reasons. The group is completely donor funded.