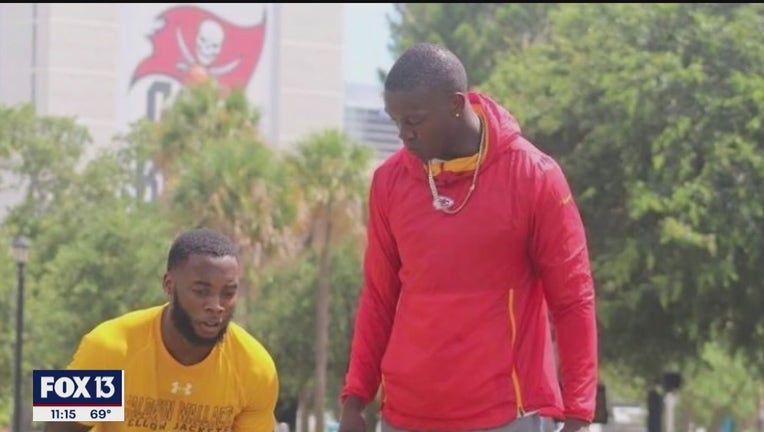 TAMPA, Fla. - Among the players who will be on the field at Raymond James Stadium for Super Bowl LV, there will be several Tampa Bay natives. However, two of them will actually be on the opposing team.

Wide receiver Byron Pringle wears No. 13 for the Kansas City Chiefs. But, at Tampa's Robinson High School, he used to wear No. 1.

"He's tenacious all the way around, I mean, he's just a freak of an athlete," said former Robinson coach Craig Everhart.

For Everhart, there's a lot of pride in seeing hard work and discipline pay off with back-to-back Super Bowls.

"Just watching him on television, whenever they kind of zoom in on the huddle or they show No. 13, he's always grinning and smiling which is how he always was in high school, too," Everhart said.

Pringle hasn't forgotten his roots. He even comes back home, from time to time, to work out with NFL hopefuls at Skyview Park.

7,500 vaccinated healthcare workers from the Tampa Bay area have been invited to the Super Bowl. It doesn't make right their sacrifices, but it's a way for the NFL to give them something to look forward to.

Around his sister's house, there's no shortage of Chiefs swag as they gear up for the big game.

"I'm so proud of him, I'm happy, we're just excited," said Alissa Freeman. "To see all the players out there, and yelling and screaming at home -- my son, we scream and be loud -- it's just really nice, very exciting."

Byron's teammate, offensive lineman Austin Reiter, is a Tampa Bay boy, too. He graduated from Lakewood Ranch High School and later, USF. Last season, he was the 10th Bull to earn a Super Bowl ring.

Some fans must now make the difficult choice: Cheer for the home team or their hometown star.

"I've been torn," Everhart said, "but, definitely rooting for the Buccaneers, you know. But, it's great to watch a young man like Byron."

Game day energy goes off the charts in Tampa

Winning the NFC Championship means Bucs fans are ready for the home team to play in the Super Bowl in their home town.

Everhart joked about Pringle, "I haven't gotten into that with him exactly, but I'm pretty sure he grew up a Bucs fan."

No matter what uniform, guys like Byron and Austin teach their littlest fans that even a Super Bowl ring is within reach. Freeman's son learned from the best -- his own uncle.

Bucs' outside linebacker Jason Pierre-Paul is also a former USF Bulls football player. So, with two USF grads playing in the same Super Bowl on opposing teams, one of them is guaranteed a Super Bowl ring, which will raise the university's total to 11.

Devon Garnett loves to root for the Tampa Bay teams and was even there in-person when the Tampa Bay Bucs clinched their Super Bowl spot.