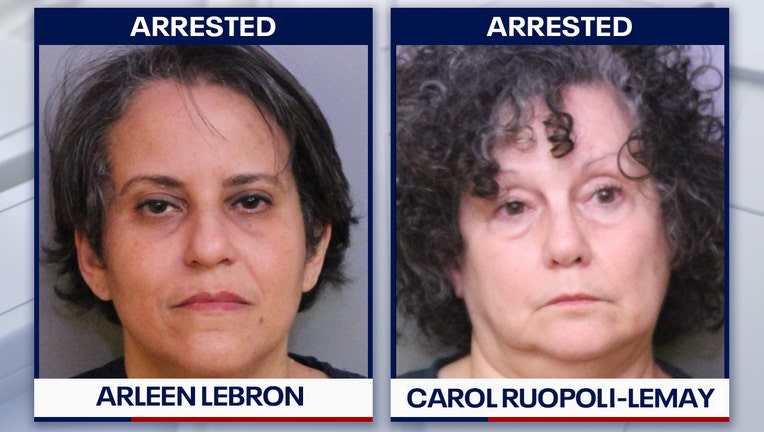 On Monday night, around 11:15 p.m., deputies responded to a report of a possible impaired person who was blocking a customer at the Waverly post office parking lot, located in Lake Wales. When they arrived, they said they found 47-year-old Arleen Lebron asleep with her vehicle still running.

Deputies said when they spoke to her, "her speech was slurred, her eyes to be bloodshot and glassy, and a moderate odor of an alcoholic beverage was coming from her breath."

Lebron was taken to the Polk County Jail on a DUI charge where her blood alcohol level samples were recorded as 0.142 and 0.136. The legal limit in Florida is 0.08.

According to the sheriff’s office, Lebron is the director of nursing at Haines City Rehabilitation and Nursing.

On the same night, around 8:30 p.m., witnesses told deputies a possible impaired driver was heading westbound in the eastbound lanes of Cypress Gardens Boulevard in Winter Haven and almost crashed into them.

Officials said a witness followed Ruopoli-Lemay, went to her vehicle and "requested the keys from the driver, due to her driving patterns and possibly being impaired."

When deputies arrived, they said "her eyes were bloodshot and watery, and when she stood unsupported, she displayed a front to back sway of approximately 4-6 inches."

When asked if she would complete a field sobriety test, deputies said she responded with, "I can’t. I am too drunk."

Ruopoli-Lemay was arrested on a DUI charge. While at the Polk County Jail, her BAC level was recorded at 0.189 and 0.191. Officials said she is a registered nurse at the Day Surgery Center, located at 2400 Dundee Road in Winter Haven.

"Nursing is a noble profession, and those who choose this calling are committed to caring for people and saving lives," Judd said in a statement. "Driving while under the influence is the complete opposite of that - and these two nurses put people's lives in jeopardy last night. I'm grateful no one was hurt or killed. Please, use the many resources available and do not drink and drive."