As shipments of COVID-19 vaccines trickle out to health care workers and nursing home residents across the country, vaccinations for the general population aren’t expected to begin until spring — presenting a dire issue for hospitals already overwhelmed with patients heading into the holiday season.

For months, hospital leaders across the country have sounded the alarm about the pandemic pushing medical facilities to their limits. A surge in infections linked to Thanksgiving has lead to many hospitals running out of room to treat the severest COVID-19 cases, as well as facilities facing a serious staffing shortage.

Hospital officials dread what might happen in January after families board airplanes for the holidays and spend hours gathered around dinner tables or Christmas trees. 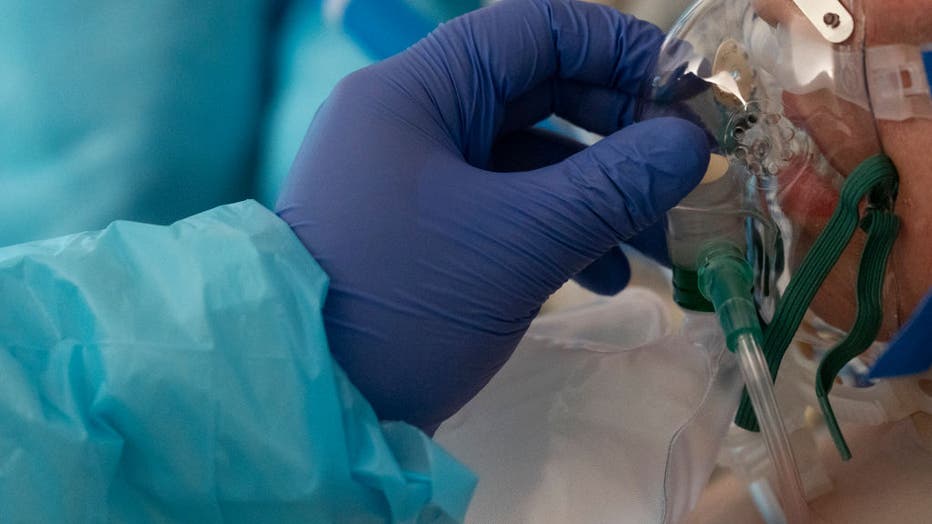 A medical staff member holds an oxygen mask for a patient in the COVID-19 intensive care unit (ICU) at the United Memorial Medical Center on Dec. 21, 2020 in Houston, Texas. (Photo by Go Nakamura/Getty Images)

In California, many of the state’s hospitals are running out of room, being forced in some cases to treat patients in hallways and lobbies. The nation's most populated state is also desperately searching for 3,000 temporary medical workers to meet demand. State officials are even reaching out to foreign partners in places like Australia and Taiwan amid a shortage of temporary medical workers in the U.S., particularly nurses trained in critical care.

"We’re now in a situation where we have surges all across the country, so nobody has many nurses to spare," said Dr. Janet Coffman, a professor of public policy at the University of California, San Francisco.

However, those ratio requirements are being waived at many hospitals amid virus cases surging.

Additionally, the pool of available travel nurses is drying up as demand for them jumped to 44% over the last month, with California, Texas, Florida, New York and Minnesota requesting the most extra staff, according to San Diego-based health care staffing firm Aya Healthcare.

Aya Healthcare is one of two companies contracted by California to fulfill hospitals' staffing requests.

Dr. Mark Ghaly, California’s secretary of Health and Human Services, said it’s feared entire areas of the state may run out of room even in their makeshift "surge" capacity units "by the end of the month and early in January." In response, the state is updating its planning guide for how hospitals would ration care if everyone can’t get the treatment they need, he said.

In Nevada, a hospital resorted to using its parking garage to handle an overflow of hospitalized COVID-19 patients.  Renown Regional Medical Center in Reno, which converted its garage to an alternative care site in November, has treated more than 370 patients there to date.

Last month, officials with the Cleveland Clinic in Ohio said hospital systems in the state had already been forced to transfer ventilators and high-flow oxygen equipment due to a shortage — prior to Thanksgiving. Dr. Robert Wyllie, the chief of medical operations at Cleveland Clinic, added that the health system was similarly facing a staffing shortage, which he called "his biggest concern."

"I want to emphasize that we look at each of these infections, and they’re not catching it in the hospital. Our caregivers are getting COVID in the community," Wyllie said during Ohio Gov. Mike DeWine’s press conference featuring a number of hospital leaders in the state.

Nationally, 78% of intensive care hospital beds were occupied during the week ending Dec. 17, according to data compiled by the New York Times.

Overwhelmed ICUs and staffing shortages come as the U.S. reports more than 18 million confirmed virus cases, and more than 320,000 virus deaths — the highest figures in the world, by far.

Two vaccines against the virus, one developed by Pfizer and a second by Moderna, have been approved for emergency use in the U.S. Both started arriving at hospitals and long-term care facilities this month, where priority is being given to those most at risk and on the front lines of the crisis.

Dr. Anthony Fauci, the nation’s top infectious disease expert, said Tuesday that he expects to start vaccinating the general population "somewhere in the end of March, the beginning of April."

In an interview with Good Morning America, he estimated that most Americans will have access to the new COVID-19 vaccines by mid-summer, adding that the process could take up to four months to reach all Americans who want to receive the vaccine.

Fauci also reiterated his longstanding plea for Americans to curb their normal Christmas and holiday plans this year as the virus continues to surge all around the country.

RELATED: Christmas in the ICU: Decorations, lights and tears