Los Angeles Lakers legend Kobe Bryant was inducted into the Naismith Basketball Memorial Hall of Fame on Saturday with a touching speech by his wife, Vanessa.

Kobe and Vanessa's surviving daughters Natalia, Bianka, and Capri also joined their mother for the East Coast journey. The girls also honored their sister, Gigi, by wearing their Mambacita gear. Proceeds from the athleisure line, that launched on what would have been Gigi's 15th birthday, will benefit the Mamba and Mambacita Sports Foundation.

Many athletes and celebrities have worn the Mambacita clothing line in support of Vanessa's charitable efforts as she continues to keep the legacies of her late husband and daughter alive.

Los Angeles Lakers legend Kobe Bryant, along with a loaded class that includes Kevin Garnett, Tamika Catchings, and Tim Duncan, became Hall-of-Famers during a ceremony at Mohegan Sun in Uncasville, Connecticut on May 15.

Vanessa and Natalia also stepped in to receive Kobe's Hall of Fame class jacket and ring.

The 2020 Hall of Fame class ceremony was delayed a year due to strict coronavirus restrictions that were in place last summer.

On May 15, Michael Jordan presented the legendary sports icon with the award and Vanessa Bryant gave a heartfelt speech in his honor. 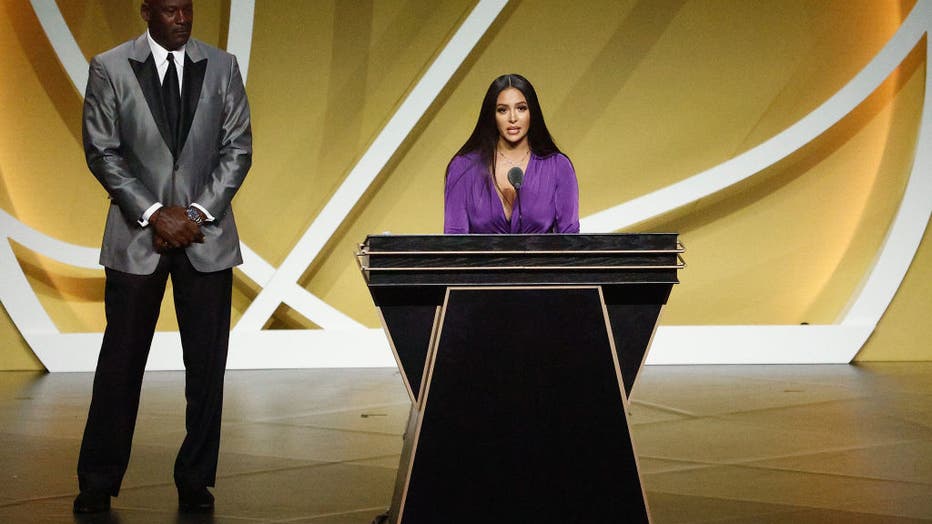 UNCASVILLE, CONNECTICUT - MAY 15: Vanessa Bryant speaks on behalf of Class of 2020 inductee, Kobe Bryant alongside presenter Michael Jordan during the 2021 Basketball Hall of Fame Enshrinement Ceremony at Mohegan Sun Arena on May 15, 2021 in Uncasvil

ESPN reported Bryant is the only enshrined member to get a stand-alone space at the museum since Jordan in 2009.