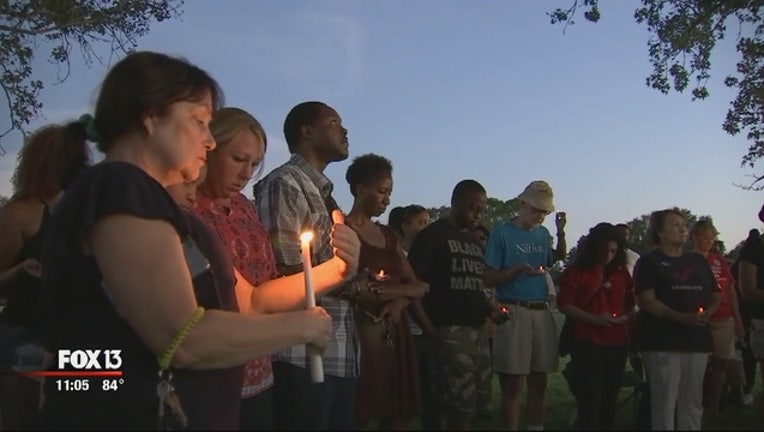 CLEARWATER (FOX 13) - Wednesday marked the two month anniversary of Markeis McGlockton’s death after he was shot and killed by a man who claimed Florida’s controversial Stand Your Ground law.

His death sparked several protests, but the community gathered to celebrate his life Wednesday at Wright Park.

Warm amber light from candlelight broke through the darkness over cannot be filled remains in the hearts of McGlockton’s family, friends and even strangers.

“Obviously, you can imagine the pain of having to come. This is month two of realizing that and dealing with the fact that their son, their partner, their father is no longer here,” said Michele Rayner, the family’s attorney.

McGlockton, 27, was shot and killed by Michael Drejka, 48, over a handicap spot at a Clearwater store. Drejka said he fired in self-defense and the Pinellas sheriff's office didn't initially charge him, citing Florida’s controversial Stand Your Ground law.

“We don’t support the Stand Your Ground law. It is pretty much an oppressive law designed to oppress the black communities. Usually, the victims of that law are the black members of our community. We think that it’s very unjust,” said vigil attendee Petia Rodewald with Moms Demand Action.

“My son was just a little bit younger than Markeis and has patronized that store many times, so it could have been him,” said Marilyn Turman, who attended the vigil.

In the wake of protests, many left it all behind to remember the father of three, and while there was positive energy to bring the community together, those who advocate against gun violence say they want justice.

“In his mind, he was defending himself. But from the looks from the tapes, he was just pushed away from an argument and he would have walked away with a bruised ego. Instead, he took a person’s life,” said Rodewald.

The family’s attorney says McGlockton’s parents and his girlfriend were thankful for the vigil, but it’s a painful reminder that Markeis is no longer with them.