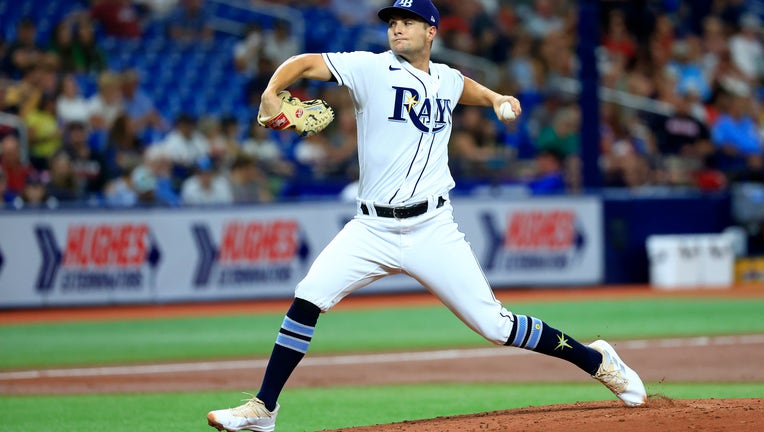 ST. PETERSBURG, Fla. - Shane McClanahan earned his 10th win and regained the major league lead in strikeouts during his final outing before the All-Star Game, pitching the Tampa Bay Rays past the Boston Red Sox 4-1 on Wednesday night.

Taylor Walls homered for the Rays, who have won five straight against the rival Red Sox.

McClanahan (10-3) struck out six and allowed one run in 6 1/3 innings of three-hit ball. He increased his season total to 147 strikeouts.

The 25-year-old lefty lowered his AL-best ERA to 1.71 and equaled his win total from his rookie season last year. He's certainly a deserving candidate to start for the American League next Tuesday at Dodger Stadium.

It was the seventh straight start in which McClanahan pitched at least six innings and gave up no more than one earned run. He threw 85 pitches.

Colin Poche worked the ninth for his sixth save.

Ji-Man Choi drove in the game's first run with a single off Boston starter Josh Winckowski in the third. Harold Ramirez made it 2-0 by dropping a single over the head of first baseman Bobby Dalbec.

Walls' fourth home run made it 3-0 in the fourth. Josh Lowe scored from first base on Yandy Diaz's two-out single in the seventh for the Rays' final run.

Xander Bogaerts scored Boston's run on a double-play grounder after leading off the fifth with a single.

The loss dropped the Red Sox to 0-9-1 in 10 series against AL East opponents this season.

Red Sox: X-rays on 2B Trevor Story (hand) and LHP Matt Strahm (wrist) were negative. Both players were injured Tuesday night. The Red Sox will monitor their recoveries before determining whether to put either one on the injured list. ... LHP Chris Sale felt good after pitching five innings in his season debut Tuesday, and is likely to pitch Sunday at New York. ... C Kevin Plawecki was activated after spending two days on the COVID-19 injured list, and C Connor Wong was optioned to the minors.

Rays: LHP Josh Fleming will miss at least three weeks before having his strained oblique re-evaluated. ... 2B Brandon Lowe (lower back) played an entire game for Triple-A Durham and is scheduled to DH in one more rehab game before rejoining the Rays for the first time since May 15.

The McClanahan-Winckowski matchup was a rematch of a high school game played more than eight years ago and about 115 miles south of Tropicana Field.

McClanahan pitched for Cape Coral High School and Winckowski was on the mound for Fort Myers Cypress Lake on April 14, 2014.

Rays pitcher Corey Kluber reached 10 years of major league service, fully vesting him in the pension plan. The team congratulated him on the ballpark video board.