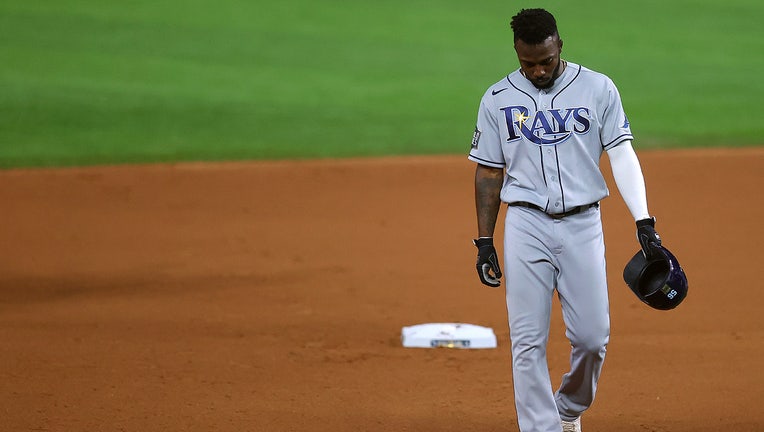 Randy Arozarena reacts after the end of the top of the fifth inning against the Los Angeles Dodgers in Game Six of the 2020 MLB World Series. (Photo by Ronald Martinez/Getty Images)

ARLINGTON, Texas - Randy Arozarena did pretty much everything during a breakout performance for the Tampa Bay Rays.

Except win it all.

Arozarena extended his big league record with his 10th postseason homer Tuesday night, but Tampa Bay lost 3-1 to the champion Los Angeles Dodgers in Game 6 of the World Series.

Arozarena batted .364 (8 for 22) with three homers and four RBIs in the Fall Classic, but it wasn't enough. The rookie outfielder also set a major league record with 29 hits and 64 total bases for the postseason.

“That was unbelievable. We were watching him in San Diego, what he did against the two AL teams, and then he brought it over in the World Series. He never stopped,” Dodgers slugger Cody Bellinger said. “Really special talent, clearly, and he's going to have an unbelievable career ahead of him.”

One year ago, Arozarena was coming off his first stint in the majors with St. Louis. The Cuban Rocket hit .300 in 19 games with the Cardinals, and then went 0 for 4 with three strikeouts in five appearances during the team's run to the NL Championship Series.

The Los Angeles Dodgers have won their first World Series since 1988, beating the Tampa Bay Rays in Game 6 to end a pandemic-shortened season.

Arozarena missed the start of this season after he tested positive for the coronavirus. He was working out at the team's alternate training site when the Rays traded Martínez to the Cubs on Aug. 30, clearing the way for his promotion.

The 25-year-old Arozarena hit .281 with seven homers and 11 RBIs in 23 games during his first season with Tampa Bay, helping the team win the AL East for the first time in 10 years.

Arozarena put together a strong finish to the season, and then carried his momentum into the playoffs. He went 12 for 20 with three homers in his first five postseason games.

His last homer in the World Series, an opposite-field drive to right in the first, gave Tampa Bay a 1-0 lead in Game 6.

“The home run the first inning, I was like, you’ve got to be kidding me,” Bellinger said. “A slider three inches away it seemed like, and he barreled it up and hit it out. I’m like, this guy is unbelievable.”

There were runners on first and second when Arozarena batted again in the second, but he struck out swinging for the final out of the inning.

Arozarena also singled with two outs in the fifth, but was stranded there when Austin Meadows bounced out.