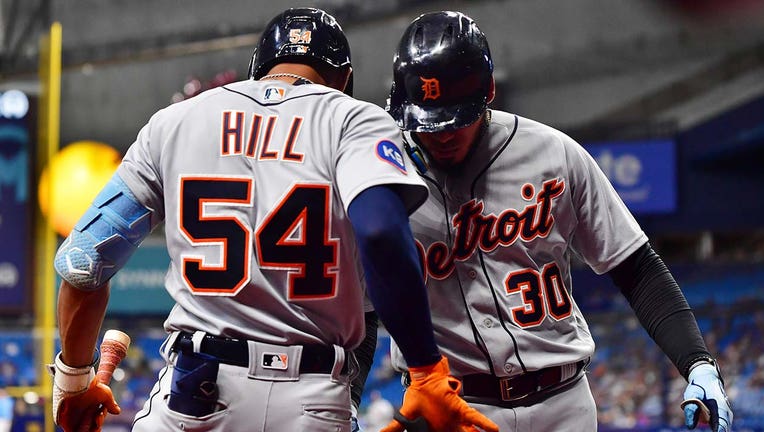 ST PETERSBURG, FLORIDA - MAY 16: Derek Hill #54 celebrates with Harold Castro #30 of the Detroit Tigers after a home run in the ninth inning against the Tampa Bay Rays at Tropicana Field on May 16, 2022 in St Petersburg, Florida. (Photo by Julio Agui

ST. PETERSBURG, Fla. - Harold Castro hit his first home run of the year with two outs in the ninth inning, a tiebreaking shot that sent the Detroit Tigers past the Tampa Bay Rays 3-2 on Monday night for their season-best fourth straight victory.

Castro connected off Andrew Kittredge (3-1) for his first long ball since going deep in consecutive games against Oakland in early September last year. He had three home runs in 2021.

Michael Fulmer (2-2) got the win in relief and Gregory Soto pitched the ninth for his sixth save in seven tries.

Jonathan Schoop hit a two-run homer that put Tigers rookie Alex Faedo in position for his first major league win, but Brett Phillips helped the Rays erase their 2-0 deficit with a home run in the sixth and a leadoff double against Fulmer in the eighth.

Phillips scored on Wander Franco's sacrifice fly to tie it.

Faedo, a first-round draft choice in 2017 who did not pitch in 2020 or 2021 because of the pandemic and Tommy John surgery, tossed 5 2/3 innings in his third career start. He gave up one run and four hits, striking out four.

Phillips had three of Tampa Bay's six hits, including his third home run of the season.

Kluber allowed two runs and four hits in six innings. He struck out eight, including five in a row.

Tigers: OF Austin Meadows (vertigo) and OF Victor Reyes (left quad strain) were placed on the 10-day injured list. OF Daz Cameron was recalled from Triple-A Toledo and will be in the lineup Tuesday. ... RHP Michael Pineda (fractured right middle finger) visited a doctor to determine a course of treatment. ... RHP Matt Manning (sore shoulder) will pitch for Toledo on a rehab assignment Wednesday.

Rays: 2B Brandon Lowe went on the IL with lower back discomfort. INF Isaac Paredes was recalled from Triple-A Durham.