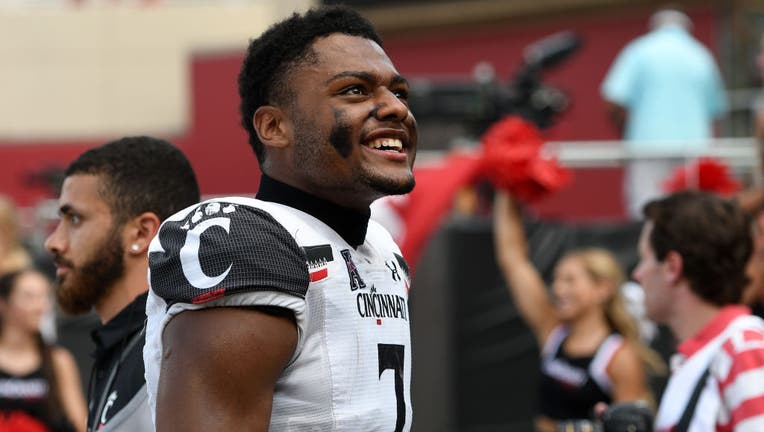 BLOOMINGTON, IN - SEPTEMBER 18: Cincinnati Bearcats cornerback Coby Bryant (7) celebrates at the conclusion of the college football game between the Cincinnati Bearcats and the Indiana Hoosiers on September 18, 2021, at Memorial Stadium in Bloomingto

WASHINGTON - As the Cincinnati Bearcats (13-0) prepare to battle the Alabama Crimson Tide (12-1) in the College Football Playoff semifinal in the Cotton Bowl Friday, Bearcats star cornerback Coby Bryant is doing something special for the matchup.

Coby is changing his jersey number to honor the memory of Los Angeles Lakers great Kobe Bryant. The Hall of Fame basketball player died in a helicopter crash along with seven others including his daughter, Gianna, in January 2020.

Coby traditionally wears the no. 7 for the Bearcats but will switch to the no. 8 worn by the Lakers legend.

In an interview retweeted on his Twitter page, the Bearcats senior told local reporters about his motivation to switch numbers. "I wanted to go vintage Kobe. I wanted to bring that playoff mentality," Bryant said. "The Mamba Mentality is what I carry on to this day."

Coby received the Jim Thorpe Award which honors the best defensive player in college football. He also earned the Walter Camp All-American honors as one of the nation’s top players, and he’s projected to be one of the top defensive players selected in the 2022 NFL draft.

The Cleveland, Ohio native had a stellar season to help the undefeated Bearcats reach the College Football Playoff. He finished the regular season with 41 tackles, three forced fumbles, three interceptions, and 11 pass breakups.

Alabama and Cincinnati square off in the first game of the College Football Playoff semifinal at 3:30 p.m. ET Friday.