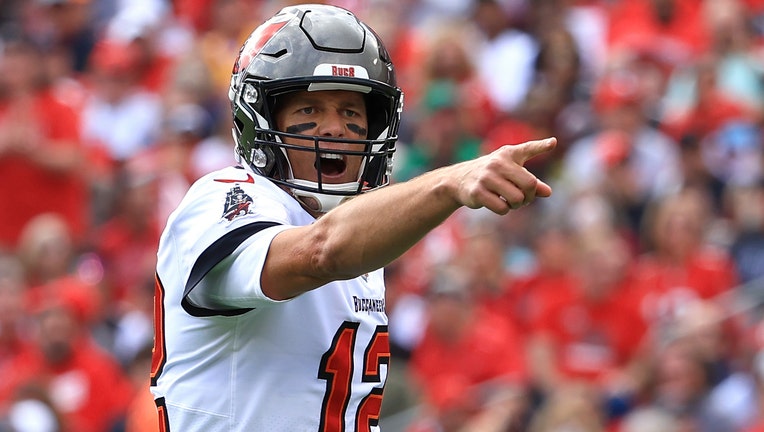 TAMPA, FLORIDA - JANUARY 16: Tom Brady #12 of the Tampa Bay Buccaneers points against the Philadelphia Eagles during the first quarter in the NFC Wild Card Playoff game at Raymond James Stadium on January 16, 2022 in Tampa, Florida. (Photo by Mike Eh

TAMPA, Fla. - In just five playoff games with the Bucs, Tom Brady has thrown more touchdowns than all of the Buccaneer's previous quarterbacks combined. Brady is now in a league of his own drawing comparisons to other NFL team's playoff records.

He's moved past being compared to the NFL's greatest players. Brady now is on the all-time list with NFL franchises. Only three teams have racked up more playoff wins than team Brady and only four have thrown more postseason touchdown passes than TB12.

"It's just next level," said Ali Marpet. "Every week it’s just like they announce some record, and it’s usually his record that [he] broke at the stadium. It’s like, ‘Oh, Tom broke another record.’ It’s just unbelievable."

"It is crazy to see him being compared to franchises," commented Shaq Barrett. "Then to hear that he got more touchdowns (playoffs) than all of the quarterbacks combined here, in 5 games, is like crazy, mind-blowing for sure."

Given all of Brady's achievements. Are there any more to conquer or had TB12 run of out records to break?

"I think it’s just a credit to all the great teams I’ve been on," stated Brady. "I’ve just been a part of so many great teams over a long period of time. I love that I’ve been able to do it for as long as I have. I love the game and I love being out there with my teammates. We’ve just had a lot of success over a lot of years trying to do the right thing. What we’ve done here the last two seasons has been a lot of fun for me to learn and grow with these players and our organization. We’ve put ourselves in a good position. Now we have to go take advantage of it."

Despite the record-setting year Brady is having, his former New England Patriots teammate Rob Ninkovich thinks we may be watching Brady in his final season.

"It wouldn’t surprise me if Tom Brady decided to walk away (this off-season) and do whatever he wants to do," Ninkovich said Wednesday on ESPN’s "Get Up!"

Brady's Bucs teammates and coaches really don't really want to think about it, but would they be shocked?

RELATED: Bucs battling history, injuries in second round of playoffs

"I don’t know him," said Byron Leftwich. "I didn’t really hear the comment, but Tom is playing at a high level. I’ll leave it at that."

"I don't want it to end at all," shared Shaquil Barrett. "But I mean if you want to go out the best way is to go out on top. Don't hang them up Tom, man don't do it."

Brady has dropped hints throughout the season making you believe he's coming back but also has mentioned what he's missing with his family. His decision has to be tough, but it's one that he's not ready to reveal with another Super Bowl title three wins away.