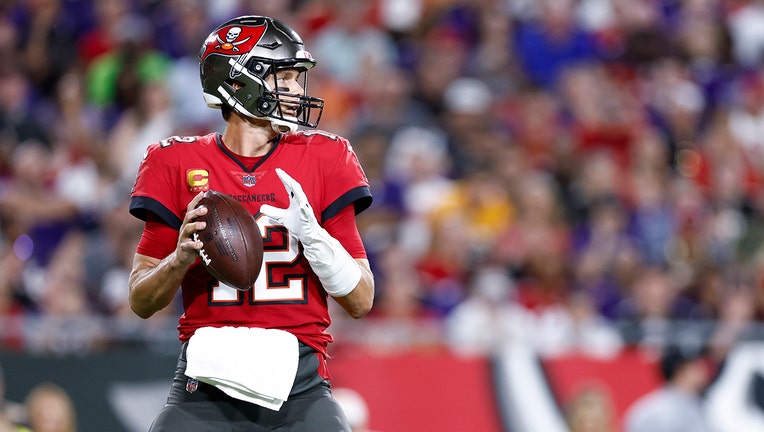 Tom Brady #12 of the Tampa Bay Buccaneers looks to pass against the Baltimore Ravens during the second quarter at Raymond James Stadium on October 27, 2022 in Tampa, Florida. (Photo by Douglas P. DeFelice/Getty Images)

TAMPA, Fla. - Tom Brady has elevated the Tampa Bay Buccaneers organization as soon as he walked through their doors at One Buc Place. From the Glazer's on down he's been given credit for creating a championship culture.

Players were once in awe of just his presence, but after three years has the Brady magic warn off? Is he still elevating this team? Bucs offensive coordinator Byron Leftwich believes he is without a doubt.

"Tom is Tom. Especially to be a skill guy, to be an offensive lineman – to have the opportunity to really play with him," said Leftwich. "When it’s all said and done, they’re going to call him probably the best ever. I think all those guys really appreciate having that opportunity to play with him, to compete with him, to go into these different situations that they’re in with him. I think it’s the same, I think it’s the same since he’s been here."

Leftwich said when the team loses, everything is questioned, but they are focused on pushing through and finding a way to win a game.

The Bucs could be even worse without Brady, but that doesn't make him exempt from part of their struggles. While he still leads the NFC in passing yards, Brady's production with a rash of injured players around him have declined.

His quarterback rating has dropped from second in the NFL in 2021 to 17th this season.

"We have a lot of football left, and we've got to do a better job, and the way you think about it is, ‘What did we work on today?’ ‘Did we improve it?’ ‘What are we going to work on tomorrow?’ ‘How are we going to improve that?’" Brady said. "Then prepare yourself for a game and then go out and play well. There's a lot of football to play, and we've got to play better. That's just the reality of the situation we're in."

A big part of the Bucs offense is a lack of a running game. Brady has been lethal on play action passes. They are fourth best in completions, but the Bucs are fourth from last in attempting them.

"We’ve got to do a better job of running it, right? There’s no such thing as play-action pass without running it [well] enough for it to be true," said Leftwich. "We’ve got to play better across the board. We can run it better – I can call it better. There’s a lot of different things we can do better to help the whole part of our game, really. That’s really how we look at it – we don’t look at it as one thing. [Play-actions] come off how well you’re running the ball – it’s always been. Or you’re just wasting time doing a [play-action] – it won’t do the job that you’re setting out for it to do. We just need to play better across the board."

While the priority this Sunday is to snap a three game losing streak, Brady can reach an individual milestone that's never been done before. With 164 yards passing, Brady would become the first quarterback to reach 100,000 yards in his career.

PREVIOUS: 'The cavalry ain't coming': A Bucs win on Sunday may turn season around

"All these kinds of lifetime achievement awards," said Brady. "They're great to celebrate with everyone and one day I'll look back and think that it was pretty cool, although my kids probably won't care at all. That's alright. It's a credit to all the people that I've played with. Thank you."

To Brady, it's just another personal accomplishment. Another record to add to his unprecedented long list. A list that means little to him if he doesn't win.