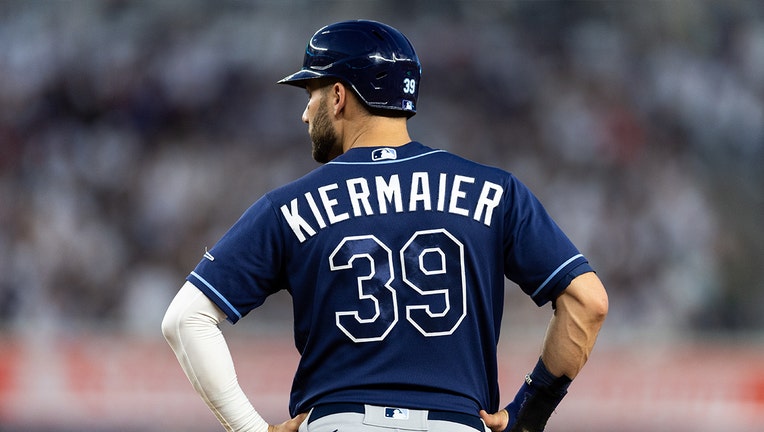 Kevin Kiermaier #39 of the Tampa Bay Rays on first base during the fifth inning of the game against the New York Yankees at Yankee Stadium on June 14, 2022 in New York City. (Photo by Dustin Satloff/Getty Images)

The 32-year-old slumped to a .228 average with seven homers and 22 RBIs in 63 games this year in a season cut short by left hip surgery in August. Tampa Bay declined a $13 million option for 2023.

"As a player you just want to feel wanted and no other team seemed to want me more than the Blue Jays," Kiermaier said. "That appealed to me so much. They made me feel loved right from the start."

George Springer could shift to right from center, and Lourdes Gurriel Jr. likely will remain in left.

"They want me manning center field out there and getting my rest when I need to," Kiermeier said during a video news conference. "But there were no platoon talks or anything like that. It seems like it’s my job to lose, I guess you could say.

"I’m going to do everything in my power to go out there and play Gold Glove-caliber defense and do what I can offensively to just be a nice complement to an already great offensive team. I’ve got a lot more left in the tank."

Kiermaier said he is at about 90% as his recovery continues. He has resumed running, hitting, and throwing.

"Come spring training and the regular season, I’ll be ready to roll," he said. "I’m ready to run around and make a lot of great things happen."