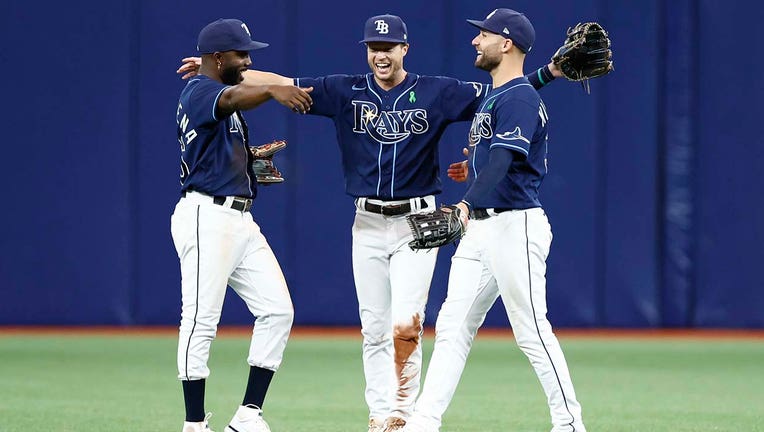 ST PETERSBURG, FLORIDA - MAY 17: Randy Arozarena #56, Brett Phillips #35 and Kevin Kiermaier #39 of the Tampa Bay Rays celebrate after an 8-1 win over the Detroit Tigers at Tropicana Field on May 17, 2022 in St Petersburg, Florida. (Photo by Douglas

Ji-Man Choi also drove in two runs for the Rays, who broke Detroit's four-game winning streak before an announced crowd of just 8,475, Tampa Bay's lowest at home since April 29.

"It’s always a treat to see," said McClanahan of the Rays' three-homer, 11-hit offense. "When those guys are firing on all cylinders, it’s awesome. It’s special. ... It’s truly fun to be a part of."

"No doubt we’ve been a little inconsistent to start the season, but this game is really tough," said Kiermaier, who raised his average to .200 with three hits. "It seems like pitchers get better year after year and we put a lot of pressure on ourselves. It's crazy how quickly you can dig yourselves into a hole offensively, but you try to make adjustments as the season goes along."

Jeimer Candelario hit a 430-foot homer off McClanahan in the fifth, his third homer of the season.

Kiermaier's fourth homer led off the second against Beau Brieske, giving the Rays a 2-0 lead.

McClanahan (3-2) breezed through three perfect innings on 27 pitches before giving up an infield single to Robbie Grossman. McClanahan allowed one run on four hits.

"He has gotten so much batter from last year to this year and it seems like he gets better every start," Kiermaier observed. "I knew he was dangerous before but he's got to be a top-three pitcher in the game. What he’s doing right now is incredible. He’s pitching with a lot of confidence and he should be."

Phillips homered for the second straight night, leading off the fifth with his fourth this season. Arozarena, who had 10 homers in the 2020 postseason, hit just his second homer of the season off Will Vest in the eighth. It came in his 148th plate appearance.

"I’ve been struggling a little bit. I’ve had a slow start this year but I think I’m getting better as of late," Arozarena said through a translator. "I’m glad I was able to connect on that. It felt pretty good."

Brieske (0-3) gave up six runs and nine hits in 5 1/3 innings, striking out four in his fifth big league start.

Grossman had two of Detroit's seven hits. including a ninth-inning single that loaded the bases with nobody out, but the Tigers did not score.

Tigers: RHP Michael Pineda will not need surgery on his fractured right middle finger, which will be placed in a splint for two-to-three weeks and then be re-evaluated..

Rays: Lowe is likely to miss at least a month after being diagnosed with a stress reaction in his lower back. Lowe will be kept out of baseball activity for three weeks before a timeline can be established for his return.