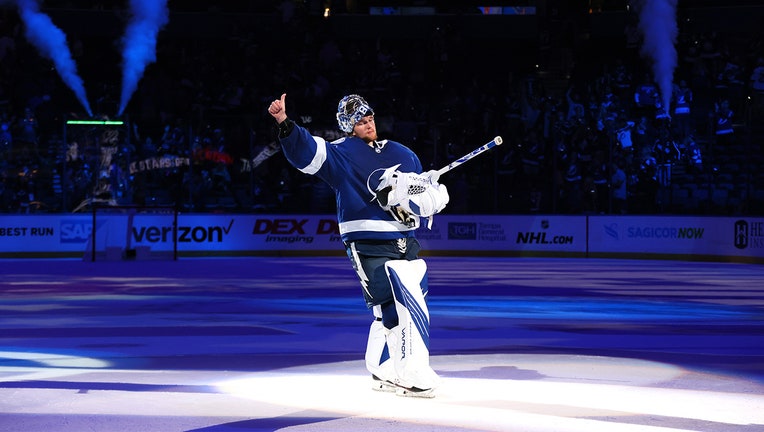 TAMPA, FLORIDA - JUNE 15: Andrei Vasilevskiy #88 of the Tampa Bay Lightning celebrates after defeating the New York Islanders with a score of 2 to 4 in Game Two of the Stanley Cup Semifinals in the 2021 Stanley Cup Playoffs at Amalie Arena on June 15

TAMPA, Fla. - The Tampa Bay Lightning are running out of superlatives to describe the playmaking ability of NHL playoff scoring leader Nikita Kucherov.

"He’s remarkably gifted ... does everything with grace," coach Jon Cooper said Tuesday night after one of the league’s most creative scorers had three more assists to help the defending Stanley Cup champions even the Stanley Cup semifinals with a 4-2 win over the New York Islanders in Game 2.

"He’s just so smooth in the plays he makes, his vision and how he can see and make plays," Cooper added. "It almost looks effortless. ... I know it’s not. He works at doing what he does extremely well. But he sure can make plays out of what looks like nothing. ... And, he is fun to watch.″

Kucherov had his fourth game with three or more points this postseason, assisting on goals by Brayden Point, Ondrej Palat, and Victor Hedman as the defending champions improved to 12-0 in games following a playoff loss since the start of last year’s title run.

Point scored a goal for the fifth straight game, hiking his league-leading playoff total to 10. Palat put Tampa Bay ahead for good with a second-period goal that replays showed was scored with the Lightning having too many men on the ice.

"It was missed, that’s hockey," New York winger Matt Martin said. "It happens, and there’s nothing we can do about it. Move on to the next game at home and focus on that."

Andrei Vasilevskiy stopped 24 of 26 shots for the Lightning, who entered Tuesday night facing a series deficit for the first time since dropping Game 1 of last year’s Stanley Cup final against the Dallas Stars.

"We knew they were going to come with a good response," Islanders center Brock Nelson said. "I thought we did a pretty good job out of the gates. But they were able to get a couple and get the lead and we weren’t able to get it back."

Hedman and Jan Rutta scored in the third period against Islanders goalie Semyon Varlamov, who missed a portion of the opening period after a collision with Point a little over 13 minutes into the game.

Nelson and Mathew Barzal scored unassisted goals for New York, which — despite the loss — will return home feeling good about itself heading into Game 3 Thursday night.

"We can be a lot better and we will be," Islanders coach Barry Trotz said.

"I thought the first two periods we were pretty good for the most part. We knew a very good hockey team was going to have a desperate push," Trotz added. "Obviously the second goal hurt quite a bit because now if they get the third one there’s a little bit more separation. And ... there were too many men on the ice. Seven guys. That was disappointing."

Point, pushed from behind by New York’s Adam Pelech, barreled into Varlamov at 6:50 of the first period. The Lightning star drew a penalty for interference on the goalie, and the Islanders wasted no time taking advantage of what Tampa Bay felt was a questionable call.

Nelson’s goal from in front of the net tied it 1-1 just 20 seconds into the power play.

Ilya Sorokin replaced Varlamov for the remainder of the first period. He stopped all six shots he faced before Varlamov, who allowed four goals on 27 shots, returned.

Point has 10 goals in 13 games this postseason after setting a Lightning franchise playoff record with 14 during last year’s Stanley Cup run. The 25-year-old center scored off a nifty no-look pass from Kucherov, who delivered the puck from behind the net. Kucherov’s three assists boosted his league-leading playoff point total to 22 (five goals, 17 assists) after missing the entire regular season while recovering from hip surgery.

"I think it was just a feel for each other and trying to read off each other before the puck gets behind the net," Kucherov said, describing what happened on Point’s goal. "I’m trying to think what he would be thinking. I tried to find him on the short side, and he did a helluva job putting it in."

Kucherov has 44 assists since the start of the 2020 playoffs. That’s the most in consecutive seasons by a NHL player since Doug Gilmore had 47 in 1993 and 1994.