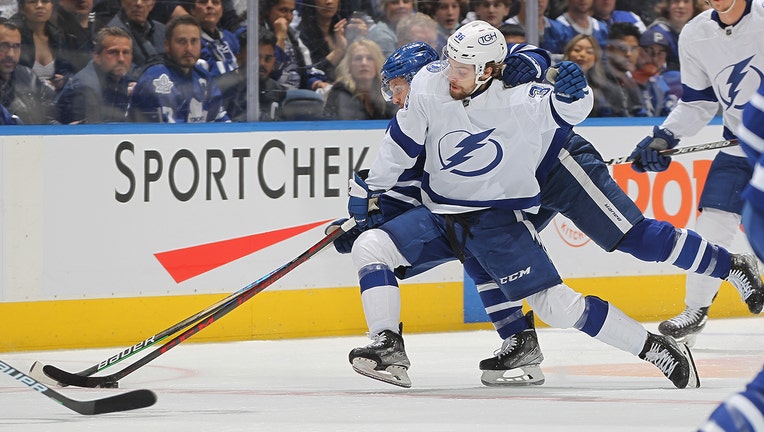 TORONTO, ON - MAY 4: Alexander Kerfoot #15 of the Toronto Maple Leafs draws a penalty for pulling down Brandon Hagel #38 of the Tampa Bay Lightning during Game Two of the First Round of the 2022 Stanley Cup Playoffs at Scotiabank Arena on May 4, 2022

TAMPA, Fla. - The Bolts are back home in Tampa and the team is looking to take control of the series against Toronto.

Game 3 will take place at Amalie Arena. The puck drops at 7:30 p.m. Friday. The series may be all tied up by the Lightning are hoping to change that by the end of the night.

The series started out rocky for the Bolts in Toronto with a 5-0 loss on Monday, but then the Lightning showed up during Wednesday night’s game to tiethe series. On Friday, they’re back on home ice for their first home game of the playoff season, riding high off Wednesday’s win and ready to pull ahead.

Coach Jon Cooper and the team are feeling confident about their chances, especially being back on home ice. Another thing playing in the Bolts' favor, the Lightning have not lost back-to-back playoff games in three seasons.

If fans don’t have a ticket to the game inside of Amalie Arena, they can still be part of the fun outside on Thunder Alley as the Lightning’s Plaza Parties are back. For a $5 donation to the Lightning Foundation Charities, fans can get a ticket and be part of the fun outside alongside hundreds of other fans, watching the game up on the big screen.

Fans will need to buy a ticket ahead of time to be part of the Lightning Plaza Party. Visit www.nhl.com/lightning/fans/plaza-parties.

Victor Hedman had a goal and three assists for his first four-point playoff game and the Tampa Bay Lightning beat the Toronto Maple Leafs 5-3 on Wednesday night in Game 2 to even the first-round series.

Mitch Marner had a goal and an assist for Toronto, Michael Bunting and Alexander Kerfoot also scored and Jack Campbell made 29 saves. Auston Matthews had two assists.